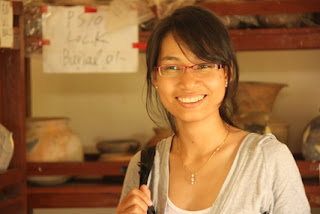 It's our great pleasure to welcome Savina Sirik (right) as an IntLawGrrls contributor.
Savina is a Team Leader for the Living Document Project and Public Information Room of the Documentation Center of Cambodia, where she has worked since 2004.
She has conducted extensive field research on the psychological impacts of the Khmer Rouge regime, worked on a documentary film about sexual abuse under the Khmer Rouge, and directed a comprehensive public information campaign about the Extraordinary Chambers in the Courts of Cambodia (ECCC).
Savina focuses on encouraging women’s participation both within the tribunal process and in the broader political system. She hopes to foster greater involvement of community members in political processes, particularly by encouraging women to take on community leadership roles.
Savina received her Bachelor of Arts degree in Archaeology from the Royal University of Fine Arts in Phnom Penh, Cambodia, and also holds a Master of Arts in Peace and Reconciliation Studies from Coventry University in the United Kingdom.
Recently, Savina interviewed Duch, who ran the Khmer Rouge's infamous Tuol Sleng prison, to which "enemies of the revolution" were sent. As IntLawGrrls have detailed in posts available here, Duch was the defendant in the first case before the ECCC, which found him guilty of crimes against humanity, torture, and murder, sentencing him to 35 years in prison. Savina discusses the interview in her introductory post below.
Heartfelt welcome!
by Jaya Ramji-Nogales at 6:00 AM