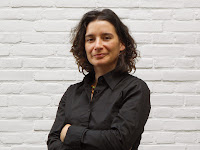 It's our great pleasure to welcome Yael Vias Gvirsman (left) as an IntLawGrrls contributor.
Yael is a lawyer, having been admitted to the Israeli Bar Association in 2006. She has a law degree from Strasbourg University in France, and also studied international law, including international criminal law and international human rights, at Utrecht University, in 2001-2002. Yael holds a master's degree in international relations, diplomacy, and conflict from Auvergne University.
She practices international criminal law, and is currently working on 2 defense teams – of Callixte Mbarushimana at the International Criminal Courtl and of Charles Taylor at the Special Court for Sierra Leone. She lives in The Hague with her husband and baby daughter.
Yael is a Ph.D. candidate at Hebrew University of Jerusalem, studying international criminal law as a form of intervention in conflict. Yael is a co-founder and has been an Executive Board Member of ALMA, the Association for the Promotion of International Humanitarian Law since its creation in 2010.
Her past experience includes research positions with the Hebrew University, Prosecutor at the State Attorney’s office and Legal/Eligibility Officer with UN High Commissioner for Refugees in Tel Aviv. Yael trained at the Ministry of Foreign Affairs, the International Criminal Tribunal for Rwanda and the UN Office for the Coordination of Humanitarian Affairs in New York.
Her introductory post below discusses the film, One Day in September, about the killing, 40 years ago this month, of eleven Israeli athletes at the 1972 Olympic Games.
Yael dedicates her post today to Hannah Szenes. Hungary-born Szenes – about whom Yael promises a future blog post – was among dozens of Jewish persons who parachuted into Yugoslavia to try to liberate persons in transit to Auschwitz. Szenes eventually was arrested, convicted of treason, and executed by firing squad in 1944, at age 23. Today Szenes joins other inspiring women on IntLawGrrls' foremothers' page.
Heartfelt welcome!
by Jaya Ramji-Nogales at 6:00 AM