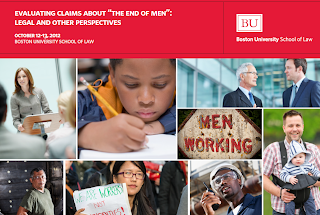 Yesterday and today, Boston University School of Law School is hosting an important conference entitled "Evaluating Claims about ‘the End of Men’: Legal and Other Perspectives".
The cluster of issues addressed is very much in the news: The conference uses Hanna Rosin’s provocative coinage “the end of men,” based on her book, The End of Men: And the Rise of Women (Riverhead, 2012).
Consider, for example:
► The May 21 front-page New York Times story, “More Men Enter Fields Dominated By Women,” on which we posted, and before that,
► The May 11 essay in The Wall Street Journal, “Are Dads the New Moms?”
Boston University Law Professor Linda McClain, the conference organizer, has brought together a wide group of legal and multidisciplinary scholars to give sustained, careful, and lively investigation to the ideas and challenges that the sound-bite idea of the ‘end of men’ presents.
Conference participants include Rosin, who gave the keynote address yesterday, as well as feminist scholars and masculinity theorists such as Professors Michael Kimmel, SUNY at Stonybrook; Joan Williams, University of California-Hastings College of Law; Ann McGinley of the University of Nevada; my co-author, IntLaw Grrls contributor Naomi Cahn, of the George Washington University School of Law, June Carbone of the University of Missouri-Kansas; and Ralph Richard Banks of Stanford Law School.
Among the topics to be discussed today:
Comparative and international perspectives on the “End of Men.” Presenting, in addition to yours truly, Fionnuala Ní Aoláin, will be Pnina Lahav of Boston University School of Law , Mary Anne Case of the University of Chicago Law School,  Shahla Haeri of Boston University Department of Anthropology , and Julie C. Suk, visiting this year at Harvard Law. Challenging the cohesive narrative of progress offered by Rosen, we will address a range of contemporary comparative law perspectives on the continuing inequalities and challenges that women face across multiple jurisdictions.
Details here.
by Fionnuala Ní Aoláin at 4:30 AM