Feminist Approaches: A voyage of rediscovery

In preparation for this celebration of Hilary Charlesworth, Christine Chinkin and Shelley Wright’s Feminist Approaches to International Law, I unearthed my old paper copy of the article, which I had read and re-read, and read again, when I first encountered it as an LL.M. student at the University of British Columbia in the early 1990s. These days, with digital libraries, I rarely read a hard copy of anything, let alone a journal article. So dusting off my copy of CCW, as I referred to it over the years, made me feel a bit like an archivist, finding an ancient but highly valuable scroll. And inside the scroll, I found some lost (to me, at least) insights about feminist method and feminist politics. Re-reading CCW has been a voyage of re-discovery.
My copy of Feminist Approaches, pictured above, is dog-eared, marked up and photocopied so many times the print is barley legible. Flipping through this manuscript in the twenty-first century, the archivist in me finds multiple traces of late 20th century reading techniques: ‘highlighting’ in different Day-Glo shades of yellow and orange, comments scrawled in the margins, and eventually, the addition of yellow post-it notes, also now dog-eared. (I would like to disown these marginalia – and the misunderstandings they evidence – but, sadly, I detect traces of my own handwriting.)
Without wanting to over-play the metaphor ‘artifact’ (and the painful admission of aging it suggests), one can read Feminist Approaches as a bit like an ancient scroll whose prophecies and treasure maps continue to offer a way to view the present and future.
The first few paragraphs of Feminist Approaches make it clear that CCW were mapping a richly conceptual engagement with feminist analysis which the authors, quoting University of Washington political scientist Nancy Hartsock (below left), defined at pp. 613-14 as

'a method for approaching life and politics, a way of asking questions and searching for answers, rather than a set of political conclusions about the oppression of women.'

Feminist Approaches outlined a set of directions, and some future possibilities (‘prophecies’ is perhaps a bit of a stretch) about the difference feminist method could make to international law.
CCW suggested that:
► International law – its “organizational and normative” structures (p. 614) – was gendered male;
► Seemingly neutral concepts like the ‘state’, when examined more closely, would be revealed as thoroughly gendered, premised on a conception of the world that reflected the lives of (certain) men; and
► With more digging, international law’s silences – the many ways in which women and women’s interests were absent or marginalized from the discipline and practice of international law – could be excavated. CCW wrote in Feminist Approaches (p. 615):


'By taking women seriously and describing the silences and fundamentally skewed nature of international law, feminist theory can identify possibilities for change.'

And, indeed, change has happened in international law and practice since CCW wrote Feminist Approaches.
Many of the discipline’s silences about women are being revealed and challenged. Less successful but still important, the conceptual boundaries of the discipline have been explored and contested, and some have even shifted in response to, for example, the involvement of civil society actors in international matters. Women scholars, lawyers, activists and decision-makers are now more visible in international institutions than was the case in 1991. Clearly, ‘change’ has happened – and not happened – in a vast number of ways.
But in the space of all that change, CCW’s arguments for and use of feminist method remain as compelling and illuminating as they were over twenty years ago.

The term ‘artifact’ might not be entirely accurate, then. Feminist Approaches reads to me less like a representative piece from a particular time and place, and more like an instruction manual for a project that has still not run its course. 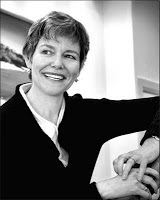 Feminist Approaches mapped and deployed multiple layers of feminist method. In her 1996 article “Cries and Whispers: Responses to Feminist Scholarship in International Law” (p. 563), Hilary Charlesworth (right) referred to this as a


'methodology of an archaeological dig where different theoretical methods are appropriate at the different levels of excavation.'

The subsequent outpouring of feminist scholarship has similarly drawn on different kinds and depths of feminist method. I wonder though if we feminists who work directly with, or at the margins of, international law have lost sight of an approach to feminism “as a method for approaching life and politics” rather than a set of postulations about women’s oppression?
In the early 1990s, feminists tended to embrace international human rights as the main framework within which feminist political claims were positioned. More recently, international criminal law has become an important frame for feminist engagement. In my re-reading of Feminist Approaches, I see the authors as starting a critical conversation about the knowledge systems that structured international law and its corresponding world view, in a way that reflected the life experience of a small, privileged, male minority. That is, CCW’s feminist methods included a consideration of mainstream epistemologies through feminist analysis.
Re-reading Feminist Approaches in the year 2012 has me thinking that it is time for renewed focus on feminist methods of all kinds – but in particular on feminist methods and challenges to dominant ways of knowing.
Drawing on feminist analysis, what kinds of questions might we ask about ‘accountability’ as a conceptual touchstone in contemporary international law and politics? What kinds of material effects are obscured by an approach to accountability defined in terms of individual criminal responsibility? What knowledge systems uphold disciplinary boundaries that extend so easily to individual responsibility but continue to sideline corporate accountability?
by Doris Buss at 6:00 AM