From GTMO, observations on Nashiri

(IntLawGrrl Kathleen A. Doty is observing this week's military commissions proceedings on behalf of the National Institute for Military Justice) 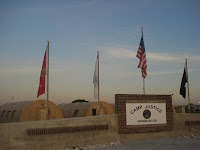 GUANTÁNAMO BAY, Cuba – This morning I stood quietly, surrounded by military men and women at attention, and listened to the national anthem of the United States of America. In my gaze was a large square encampment, surrounded by tall chain-link fences topped with barbed wire, housing prefabricated buildings beneath the watchful eye of guard towers. I am at Camp Justice, home to the Guantánamo Bay Office of Military Commissions court facility.
After proceeding through two screening checkpoints, with nothing allowed but a sweater and a pad of paper in my purse, I entered OMC Courtroom 2. Despite sitting in the gallery behind triple-paned glass, I was heartened to see a modern and traditional-looking American courtroom. I shared the gallery with other NGO observers, survivors and families of victims of the bombing of the USS Cole, and our military handlers.

In the courtroom
As in any courtroom, when the judge entered, we all rose. But we did not hear the command to do so – the 40-second delay on the video and audio feed to the gallery, designed to give the court security officer a moment to blank out any classified information, was disconcerting.
I had hoped to see the accused, Abd al-Rahim al-Nashiri, brought into the courtroom. But this morning, he waived his right to be present from his living quarters in the camp. This turned out to be the focus of the court’s discussion for the morning.
The court heard motion number 99, a request by the government for an order requiring the accused’s presence at all hearings.
► The government argued that the court should not hear any further issues until the accused was advised in open court. Prosecutors argued that the 10-point written waiver, read to and signed by the accused this morning, was insufficient to meet the requirements of the 2009 Military Commissions Act and case law from Article III federal courts. They also argued that a lack of presence and later claims of ineffective assistance of counsel are highly correlated; that the defendant faced no detrimental effects from appearing, as he has appeared multiple times in the past and would not be subjected to extreme force in transport, given that Common Article 3 of the 1949 Geneva Conventions is observed at the facility; and that there is a legitimate societal interest in seeing justice done in open court.
► The defense countered that the accused in this case is not a garden-variety defendant in custody; rather, that the past torture inflicted upon the defendant requires a different approach, so as to avoid re-traumatization. Defense lawyers argued that the written waiver by the accused should be sufficient, and that the law of the case to this point has been that this waiver is enough. They also argued that the accused should be examined by two medical professionals to assess his condition before he is required to appear in court. The defense stressed that forcible removal of the accused from the camp would be detrimental, and urged the judge that they had concerns about his condition that could only be discussed in camera.
After a 15-minute recess, the judge, Army Colonel James L. Pohl, returned and ordered that the court will require “periodic” presence for waiver of the right to appear. The judge stressed that “periodic” is open to definition, but added that because the accused has not been apprised since April, before proceedings continue, the accused must be given instruction on record. Therefore, under these circumstances, “periodic” means tomorrow.

Observations
Today’s hearing may not have addressed the more complicated issues present in this case (many of which Beth Van Schaack outlined in her GTMO reports last year, available in IntLawGrrls' GTMO series). Nevertheless, today’s hearing went to the fundamental fairness of the commission – the defendant’s presence – and of the commission’s procedure – how to obtain a fair waiver.

Without precedent to guide him, the judge is improvising as he goes along. But it is clear that he was doing so with fairness in mind. The judge carefully balanced the need to keep the trials moving without posing a threat to the defendant’s well-being. Waiting for psychological evaluation for a number of reasons discussed would delay the next hearing until January; both parties asserted that a waiver was possible at this stage, it was simply a matter of procedure as to how it was reached.
The judge also adjourned the court for the afternoon to give defense counsel the opportunity to meet with their client and explain the change of procedure. The judge appeared concerned with the need to lay an adequate and complete record. He gave both sides multiple opportunities to respond to each other, and even entertained further argument after he issued the ruling. Any Article III judge would have cut off the argument hours earlier.

Over and out, for now
I hope to report back tomorrow with an update on this and the other motions before the court. However, with a tropical storm rapidly approaching and rain pounding our tent encampment, our handlers are now discussing the possibility of evacuation. For now, over and out from Camp Justice.
by Kathleen A. Doty at 3:11 PM