Three years ago this month, the Lawyers' Committee for Cultural Heritage Preservation held its first conference in Washington, D.C. Entitled "Culture and Conflict," the conference explored the United States' March 2009 ratification of the 1954 Hague Convention for the Protection of Cultural Property in the Event of Armed Conflict. The Lawyers' Committee had reason to mark this development: the not-for-profit organization, along with the Archaeological Institute of America and U.S. Committee of the Blue Shield, had led a coalition urging the U.S. to join the treaty.
I attended the program on a whim, unaware it would have a lasting impact on me.
At the time, I'd been working in archaeology for years, and had just earned a Juris Doctor at the University of Georgia. I hoped to use this degree to preserve cultural heritage, which, though difficult to define, generally refers to the objects, places, and traditions that define us as individuals, societies, nations, and even human beings. (prior IntLawGrrls posts)
"Culture and Conflict" reaffirmed my decision. 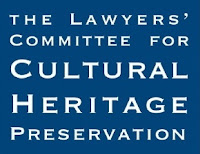 It began with the impetus to the 1954 Hague Convention: the European Theater of World War II. There and then, modern technology fully enabled man's barbaric impulses, with horrifying results for the continent's population and all they loved. Heritage was no exception. At times, it was a direct target, as with the Nazi looting of art. At others, it was an innocent bystander, as with the bombing of Monte Cassino. Either way, the result was the same, cultural devastation. After the fighting stopped, the dead were mourned, and Europe began to rebuild, Western civilization realized many of its treasures had been lost forever. The international community swore "never again" and –  based on previous efforts like the Lieber Code, Hague Conventions of 1899 and 1907, and Roerich Pact – adopted the 1954 Hague Convention.
I had an understanding of this history before the conference, but it is far from my own area of expertise. My passion has always been studying and protecting the heritage of East Asia and the Pacific. I've traveled throughout the region and worked extensively in Cambodia and Papua New Guinea. In a strange coincidence for a girl whose family hails from Kentucky and Georgia, I was the third generation to briefly call PNG home – preceded by my uncle, an engineer, and before him, my grandfather, a soldier in General Douglas MacArthur's army. 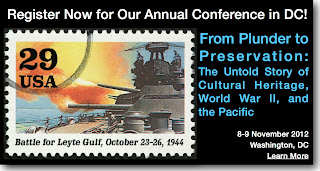 So during "Culture and Conflict," I may have been the sole one in the audience who understood the landing at Guadalcanal better than Normandy, who had visited military cemeteries in Guam but not in England. I thus find it hard to explain why I – having devoted my career to preservation – had never previously considered the impact of WWII on the Pacific's heritage. But not until that day, when presented with the wealth of research done on the subject in Europe, did my ignorance hit me.
Yes, I already knew the Empire of Japan had pillaged its way across the hemisphere, but I'd heard more about the looting of gold bullion than masterpieces. I must have realized the Japanese home front suffered greatly itself – and that countless artworks, museums, and historic buildings were destroyed in the bombings of Tokyo, Hiroshima, and Nagasaki – but I could name no examples. And I vaguely recalled a news item about the neglect suffered by Tarawa and other battlegrounds, but outside that, my knowledge was limited to the few sites I'd seen in person.
I initially believed this must be an oversight on my part alone. After all, countless books, chapters, and articles featured what has become known as "The Rape of Europa."
Surely Western scholarship had not turned its back on half the war and indeed world?
At the end of "Culture and Conflict," I took advantage of a question-and-answer session to ask that of the speakers, who included top authorities on WWII and heritage. They confirmed the topic in the Pacific had been all but ignored in the West, and possibly the East as well. A historian named Marc Masurovsky strongly encouraged me to look into it, however, and I promised him (and myself) I would.

I didn't know it at the time, but just months after this encounter, I would become the first Executive Director of Lawyers' Committee for Cultural Heritage Preservation. I've been honored to work with the organization as it champions preservation through the justice system and works to prepare a new generation of advocates. And next month, thanks to a wonderful Board of Directors and supporters around the world, we'll take on our biggest challenge yet.
On November 8 and 9, archaeologists, historians, lawyers, veterans, and other experts will meet in Washington, D.C. to attend our fourth annual conference, "From Plunder to Preservation: The Untold Story of Cultural Heritage, World War II, and the Pacific." This event could not come at a more fitting time. Last year marked 70 years since the attack on Pearl Harbor. Now, a lifetime has passed since the United States entered WWII on December 8, 1941. With 2012 additionally commemorating the Battles of the Coral Sea, Midway, and Guadalcanal, focus on the Pacific Theater of Operations has only continued to increase this year.
Yet, all these decades later, what do we know:
► Of Japan's systematic theft of Asian treasures, from Mongolia to Singapore?
► Or of the U.S. plan to first destroy – and ultimately spare – historic Kyoto?
► Of South Korea's efforts to recover its looted artworks?
► Of the race to find, and then smuggle to overseas collectors, downed "warbirds" in the jungles of Papua New Guinea?
► Or of the environmental time-bomb of sunken battleships, and gravesites themselves, in the pristine South Pacific?
We welcome you to join us in our nation's capital (information and registration here) as we begin to ask these questions about the fate of cultural heritage during the Pacific War. We know very little, yet, but we hope that is about to change.
by Unknown at 4:30 AM

Great article on an amazing topic! Truly "lost history" on a grand scale. I hope IntLawGrrls will publish articles on the outcome of your conference.