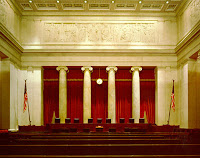 – So concludes IntLawGrrl Connie de la Vega (left), University of San Francisco Law Professor, in her capacity as counsel of record for the Brief of Amici Curiae Human Rights Advocates, et al., in Support of Respondents in Fisher v.  University of Texas. In that case, to be argued before the U.S. Supreme Court tomorrow morning, petitioner Abigail Noel Fisher, a Texan denied admission to the university, seeks to overturn a 2011 decision in which the U.S. Court of Appeals for the 5th Circuit, relying on the supreme Court's judgment in Grutter v. Bollinger (2003), upheld the university's race-conscious admissions program. (A preview of the argument is here.)
Connie's brief argues in favor of the program by showing it to be in accord with:
► 2 treaties to which the United States is a party, the 1966 International Covenant on Civil and Political Rights and the 1965 Convention on the Elimination of All Forms of Racial Discrimination;
► The views of  the U.N. Working Group of Experts on People of African Descent, a panel of independent human rights experts
► Rulings in the European Court of Justice; and
► National rulings and laws in Australia, Brazil, Canada, India, New Zealand, and South Africa.
A look at the titles of briefs filed in Fisher suggests that hers is one of the few to invoke international context – scarcely a surprise given that the Court's been rather reticent on this topic in the last few years. Kudos to Connie and her colleagues for adding this perspective to the Court's deliberations.
by Diane Marie Amann at 12:38 PM