Hissène Habré ruled Chad between 1982-1990. He is accused of committing serious crimes during his time in Office, including torture and the massacre of 40,000 people.
Reed Brody, counsel and spokesperson for Human Rights Watch in Brussels, is the star of Dictator Hunter (2007), a film based on the book by the same name. 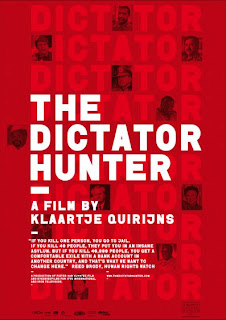 As Brody explains in the film, Chadian victims sought to hold Habré accountable for his alleged crimes. The precedent established in the Pinochet case resulted in the filing by HRW of charges on behalf of the victims against Habré in Senegal in 2000. However, Senegal stalled the case against Habré, leading Brody to file a case in Belgium under the principle of universal jurisdiction. Belgium subsequently applied to the International Court of Justice, requesting the Court to order Senegal either to prosecute him immediately or extradite him.
The film follows Brody around Senegal, his home in the United States, and Belgium. It shows him rejecting job offers from Louise Arbour and talking to victims of Habré. The film also includes interviews with Habré's lawyer in Senegal.
As IntLawGrrls have posted here and here, in July of this year, in Questions relating to the Obligation to Prosecute or Extradite (Belgium v. Senegal), the ICJ found that under the Convention against Torture and the Genocide Conviction, there is a common interest to comply with the conventions and that:


'extradition and prosecution are alternative ways to combat impunity'.

The Court consequently found Senegal in breach of two provisions of the CAT. The ICJ stated that Senegal


'must, without further delay, submit the case of Mr. Hissène Habré to its competent authorities for the purpose of prosecution, if it does not extradite him.'

(See too a detailed EJIL: Talk! discussion of the judgment by Johanna Harrington, a University of Alberta Law Professor, here.)
You can see Brody's wanted list here: as Foreign Policy's subtitle puts it, '9 former autocrats and bad guys that should be made to pay for their crimes'.The film provides an interesting background to the ICJ case and the ongoing attempts to prosecute Habré.  The search for accountability continues.