During the recent London Olympics, I went to see two women's indoor volleyball matches at Earl's Court – Great Britain v Russia and the Dominican Republic v Italy.
Rather than cheering on a particular national team, I was happy to celebrate the first Olympics in which all participating teams had a competing female individual or team. 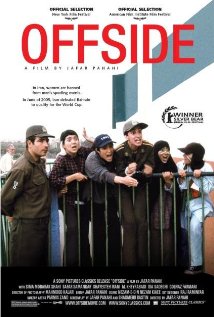 Upon my return to The Hague, I wanted to watch a movie in the spirit of women's equality and empowerment through sport. Looking through the collection of movies in the International Criminal Court library, I came across Offside (2006), an Iranian film directed by Jafar Panahi.
The movie is a brilliant comedy, about a bunch of young girls who want to watch a world qualifier football match between Iran and Bahrain. However, since Irani women are not allowed in the stadium, the girls disguise themselves as boys and attempt to get past the soldiers and stewards at the event.
Entertaining and intelligent, the film is based on Panahi's own daughter's experiences of trying to sneak into a football stadium in Iran. The film won the Silver Bear at the Berlin Film Festival in 2006, but was banned in Iran.
A fantastic mix of sport and equal rights rhetoric. Watch it.

(Cross-posted at Human Rights Film Diary blog, this post is dedicated to my friend Caitlin Fisher, Fulbright scholar and cofounder of the Guerreiras Project/Women's Futebol in Brazil)
by Unknown at 1:30 PM