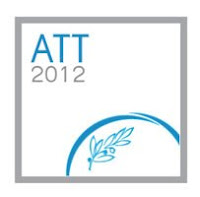 'The Obama Administration has declared that it has no “core” objections to the treaty, and the U.S. Department of State has articulated its support for a second diplomatic conference on an ATT. However, as noted, the National Rifle Association is lobbying actively against the treaty and has convinced more than half of the U.S. senators to oppose ratification, which dampens any prospect of immediate U.S. participation.'

– Our colleague, Professor Aaron Fellmeth of Arizona State's Sandra Day O'Connor College of Law, in a superb ASIL Insight with a catchy title: "The U.N. Arms Trade Treaty: Temporarily Holstered." Aaron carefully traces the nature of global arms trading. He then looks at the existing international legal framework for regulating weapons; in particular, the pervasive small arms and light weapons that spurred movement toward a U.N. Arms Trade Treaty, known to insiders at ATT. Aaron next discusses negotiations at a diplomatic conference this past July which, as we then posted, moved toward, but did not quite reach, adoption of a text. Well worth a read.
by Diane Marie Amann at 6:00 AM