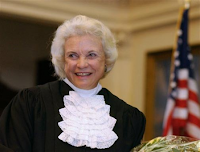 'She said that when she joined eight men on the Supreme Court, there was no resentment or concern among her colleagues, although she did face a minor problem.
'"They didn't have a women's restroom," she said, to loud laughter.'

– The Honorable Sandra Day O'Connor, the 1st woman to serve on the U.S. Supreme Court, from 1981 until her retirement in 2006. (prior posts) Jill Tucker of the San Francisco Chronicle reports that O'Connor spoke to a sold-out lunchtime crowd yesterday at the city's Commonwealth Club. (credit for photo of Justice O'Connor) Also discussed were O'Connor's 1st law job (as an unpaid local government attorney in nearby San Mateo), her most difficult decision (Bush v. Gore (2000)), and the future of the Court. On the last, this from Tucker's article:


'Could she envision an all-female Supreme Court someday?
'"Of course I can," O'Connor said, simply and almost indignantly.'