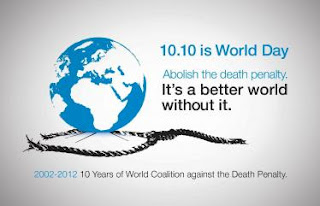 On this day in ...
... 2012 (today), is marked the World Day Against the Death Penalty. (image credit) The event was started a decade ago by a global coalition – of nongovernmental organisations, bar associations, labor unions, and governments –  that formed in the wake of the 1st World Congress Against the Death Penalty, which had convened in Strasbourg, France, in 2001. Among those that have observed this day are the British Foreign Office and Amnesty International. IntLawGrrls' many posts on capital punishment, including today's post on California's ballot initiative on whether to retain the death penalty in that state, are here.