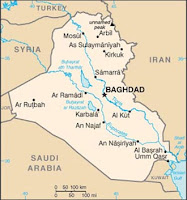 On this day in ...
... 2002 (10 years ago today), following on similar action in the U.S. House of Representatives, the Senate passed the Joint Resolution to Authorize the Use of United States Armed Forces Against Iraq. (map credit) The resolution would be signed into law by President George W. Bush on October 16. The United States would lead a coalition in invading Iraq in March 2003, beginning an intervention chronicled in our "...and counting..." series.