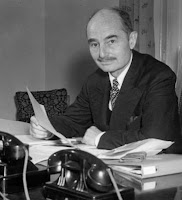 ... 1942 (70 years ago today), the 450th anniversary of the day that Christopher Columbus set foot on land in North America, in a speech entitled "Americans of Italian Origin," delivered at a Carnegie Hall Columbus Day celebration, and broadcast live, Francis Biddle, then the Attorney General of the United States, announced that "Italian aliens will no longer be classed as alien enemies." (credit for 1945 photo of Biddle) He said that 600,000 such persons were in U.S. factories, helping the Allies in World War II efforts, including "the revolt against Italian fascism" led by Mussolini. As for Japanese and others still subject to regulation for having been broadly brushed "alien enemies," Biddle added:


'I wish to emphasize that in thus removing the label of alien enemy from Italians, we do not forget 'that there are other loyal persons now classed as alien enemies. Their situation is now being carefully and sympathetically studied by the Department of' Justice.'