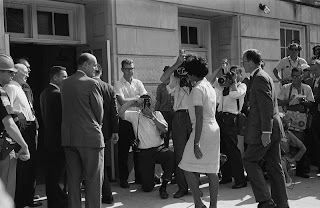 ... 2005, in Atlanta, Georgia, Vivian Malone Jones died from a stroke at age 63, fully 39 years after she'd become the 1st African American person to be graduated from the University of Alabama. She'd been born in Mobile, Alabama, was a National Honor Society in high school, and earned a bachelor's degree from a predominantly black university, only to have it lose its accreditation. Thus in 1963, in an effort to secure an accredited degree, she'd been among the 1st 2 African American persons to enroll there. Initially blocking her way had been Alabama's Governor, George C. Wallace, then a proponent of segregated education notwithstanding the Supreme Court's outlawing of the practice in Brown v. Board of Education (1954). Federalized National Guard members then assured her safe entry into the school (above). (photo credit) Jones later worked in the federal government, and, as her New York Times obituary concluded,


'In 1996, former Governor Wallace presented the Lurleen B. Wallace Award for Courage, named for his late wife, to Ms. Jones. He told her that he made a mistake 33 years earlier and that he admired her. They discussed forgiveness.
'In a speech to University of Alabama graduates in 2000, Ms. Jones suggested one lesson that might be taken from her historic experience: "You must always be ready to seize the moment."'