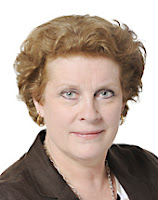 On this day in ...
... 1997 (15 years ago today), Catherine Trautmann (left), then France's Minister of Culture and Communication, announced that the official archives concerning an October 17, 1961, Paris demonstration would be opened to the public. As previously posted, the protest by tens of thousands of persons of Algerian ancestry ended with hundreds dead, including some demonstrators who were thrown into the Seine by police. Commanding the operation was the Prefect of Police, Maurice Papon, who eventually would be imprisoned for crimes against humanity stemming from his World War II collaboration with the Nazis. As depicted in a news video clip, police unions opposed the decision by Trautmann (who now serves as a member of the European Parliament) to disclose the October 17 records.