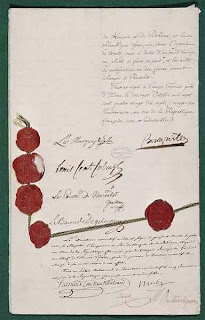 
...1797 (215 years ago today, though some sources say October 17), France and Austria signed a treaty acknowledging Napoleon's victory in Italy. It was signed at Passariano, yet became associated with a different city, Campoformio, and so is known today as the Treaty of Campo Formio (left). (photo credit) The pact gave France much territory, and "marked the end of 1,100 years of Venetian independence."