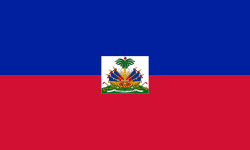 On this day in ...
... 1986, a headline in the Chicago Tribune read, "What If Haiti Has An Election, And Nobody Bothers To Vote?" The reporter had found widespread apathy in the Caribbean country on the eve of its 1st elections since the autocratic reign of Duvalier père et fils (prior posts) had begun 3 decades earlier. A constitutional assembly nevertheless elected, and proceeded to draft a new constitution, which would be adopted the following March.