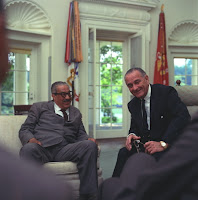 On this day in ...
...1967 (45 years ago today), The New York Times reported, using the vernacular of that date, that U.S. President Lyndon Baines "Johnson paid an unannounced visit to the Supreme Court this morning to witness the swearing in of Thurgood Marshall, who became the first Negro to sit on the high court." (credit for photo of Marshall, then U.S. Solicitor General, and Johnson in the Oval Office earlier that year, when nomination was announced) Johnson left the Court's Grand Chamber soon after Marshall "took the oath with his hand resting on a Bible." As for Marshall, he remained on the bench with his 8 new colleagues – nearest him was William J. Brennan, Jr.,  who would become a close friend – to witness the admission of  223 lawyers to the Supreme Court Bar.