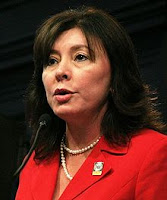 On this day in ...
... 1957 (55 years ago today), María Beatriz Zavala Peniche (right) was born in Mérida in the Mexican state of Yucatán. She earned a bachelor's degree in anthropology from the Autonomous University of Yucatán, where she has also taught, and was a graduate student in sociology at the University of Kentucky. Since 1995, Zavala has been active in Mexico's National Action Party, having served from 2006 to 2008 as Secretary of Social Development in the Cabinet of then-President Felipe Calderón. She currently serves in Mexico's Senate.