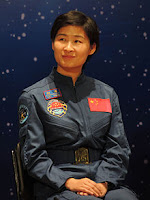 On this day in ...
... 1978, Liu Yang (right) was born in Zhengzhou in the Henan province of China. Following graduation from the People's Liberation Army Air Force Aviation College, she became a pilot in that force, attaining hte rank of major and logging more than 1,500 hours' flight time. She eventually joined her country's astronaut training program, and this year, on June 16, she became China's 1st woman in space. (photo credit) Having been in China at that time, this 'Grrl can attest to the local media's pride-filled celebration of Liu's achievement.