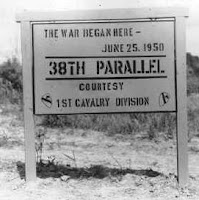 On this day in ...
... 1950, via Resolution 376(V): The problem of the independence of Korea, the U.N. General Assembly voted 42-5-7 gave support to operations by U.N. forces north of the 38th parallel, the line that had demarcated the north and south of the peninsula. (image credit) The resolution underscored as "necessary" the establishment of a "unified, independent and democratic government in the sovereign State of Korea."