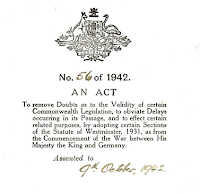 On this day in ...
... 1942 (70 years ago today), the Australian Parliament approved the Statute of Westminster Adoption Act. (credit for image of 1st page of Act) It thus adopted a British statute passed in 1931, which had conferred legislative independence on a number of dominions within the British Empire – not only on Australia, but also on Canada, New Zealand, Éire (then the formal name of what is now the Republic of Ireland), and Newfoundland (which, as posted, later became a province of Canada). By the Westminster statute, these entities "under the authority of the Crown, and not the government, of Britain."