Wildlife crime is a growing global problem, with major implications for biodiversity conservation.
The trafficking of rhinoceros horn provides a clear illustration of the difficulties that are encountered in attempting to combat the illegal transnational wildlife trade. All five species of rhinoceros are under threat; three of the five ((Black, Sumatran and Javan rhinos) have ‘critically endangered’ status on the Red List of Threatened Species produced by the International Union for the Conservation of Nature, a Switzerland-based nongovernmental organisation. (prior IntLawGrrls posts here, here, here, here, and here)
While habitat destruction is contributing to a massive decline in numbers of rhinos worldwide, poaching for horn is the main culprit.
Recently I wrote a paper about the illegal trade in rhino horn, as part of the Transnational Environmental Crime Project being undertaken at the Australian National University. The project is funded by the Australian Research Council, and conducted in partnership with the Australian Department of Sustainability, Environment, Water, Population and Communities.
About 80% of the remaining world rhinoceros population is in South Africa. In the last five years, the numbers of rhinoceros poached in that country alone has increased exponentially, rising from 13 in 2007 to 448 in 2011. The 2012 number is well on the way to surpassing 500. 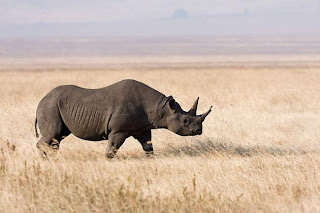 The population growth rate for South Africa’s estimated 20,700 rhino is 6% per year, but rhino poaching escalated by 35% between 2010 and 2011 alone.
These figures have given rise to concern that extinction of the species is a real possibility, despite the limits on trade imposed by the 1973 Convention on International Trade in Endangered Species of Wild Fauna and Flora, known as CITES.
The main black market for rhino horn lies in Southeast Asia, particularly Vietnam and China, where demand is driven by a belief that horn has curative properties for a range of ailments (recently expanded to include cancer), and by its use as a status symbol amongst elites. Organized crime networks are taking advantage of opportunities, presented by cultural norms and by the wealth of the growing middle class in the region, to traffic rhino horn to these markets.
Greed is a powerful driver of the trade, with enormous profits to be made. But this alone does not alone determine the trade’s sustainability.
As my paper notes, the illegal trade in wildlife is increasingly meeting with resistance from states and the international community, in the form of law enforcement and regulatory initiatives. Both money and effort are going into training and deployment of personnel to patrol poaching hotspots. New technologies for monitoring rhinos and tracking and catching poachers and smugglers are being deployed. More international agreements, designed to strengthen political will and law enforcement responses, are being signed. Campaigns are under way to inform consumers that rhino horn has no medicinal qualities and make them aware of the horrendous consequences of the trade for the animals themselves.
So why does the illegal trade persist?

The answer lies in the resilience of the networks involved in the trade. The paper examines these networks and the possible sources of their resilience to challenges, drawing from work previously done by me and others on how the notion of resilience applies in illegal contexts. Sources of resilience include the way the criminal networks are structured (internal sources) and their operating environments (external sources), including community support for poaching and connivance in the trade of wildlife products by corrupt officials and businesses. The paper explores the implications for how the trade could be tackled, including the difficult issue of legalisation of the trade, and suggests that perhaps the time is ripe for ‘grand experiments.’
For many years, wildlife trafficking and other forms of environmental crime have been neglected issues in international law and policy relating to transnational crime and to the environment. But we can no longer afford to ignore the damage that transnational environmental crime, including the illegal wildlife trade, is doing to the Earth’s resources or to overlook its connections with organized crime.
The implications of biodiversity loss for humankind are frightening, and their extent is not yet fully known. According to some, biodiversity loss today is as serious a problem as climate change in ‘eroding our own life support system from under our feet’. It is therefore good to see a new emphasis  in international forums such as Interpol and the United Nations on these issues of on wildlife crimes, and particularly on the connections between these crimes and issues of rule of law, good governance and economic development.
by Unknown at 4:30 AM