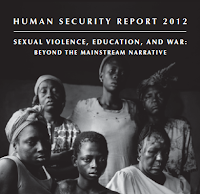 The Human Security Report Project at Canada's Simon Fraser University has just released a new Human Security Report, parts of which may be considered highly provocative.
There are important contributions in this Report, entitled Sexual Violence, Education, and War: Beyond the Mainstream Narrative, across its three substantive areas:
► Sexual violence,
► Education, and
► Assessing broader trends in human insecurity.
My preliminary assessment gives consideration to the conclusions and analysis generated on sexual violence.
The Report briefly frames its analysis of sexual violence in war by acknowledging:


'Rape and other sexual violations in wartime continue to pose a grave threat to human security in today’s wars.'


'neglec[t] domestic sexual violence in war-affected countries, even though it is far more pervasive than the conflict-related sexual violence that is perpetrated by rebels, militias and government forces.'

The Report rightly identifies an incentive structure in conflict-afflicted societies that encourages media, NGOs and international institutions to disproportionately (in the Report’s telling) concentrate on conflict related sexual violence distorting our general understanding of sexual violence in zones of conflict. Applying a critical lens to general orthodoxy in policy or scholarly endeavors is to be encouraged, and I laud the willingness of the research group to probe generally received wisdom. However, some caution – substantive and methodological – is also warranted on this Report’s conclusion.
While the Report’s authors acknowledge the paucity of political and legal interest in historically addressing gender-based violence in conflict settings, the framing is both cursory and pedantic. This matters for two reasons:
► First, feminist scholars have long noted that heightened interest in harms experienced by women wax and wane; and that the widespread preoccupation with sexual violence often operates to confirm gendered stereotypes (women as victims and women as sexual objects), not to undo them. There are no assurances that the interest in the violence that women experience in war will sustain, that any accountability capacity will endure and that the goal to redress historical lacunae in female-centered narratives of harm in war are any way close to being balanced.
► Second, little attention has been paid in most societies to appropriately and systematically documenting the scale and forms of violence experienced by women. National crime studies and statistical gathering methods evidence bias and limitation in their capture of female sexual harms. Few myths are said to exist about these pervasive and common fault-lines and they rarely capture the attention of the myth-breakers. So, there is reason to be tepid when the myth breakers turn to conflict related sexual violence and loftily pronounce the need to remedy all procedural deficiencies.
Sequentially then, the Report has the feel of an easy ‘pot-shot’ – albeit at imperfect discourses addressing sexual violence in war. But it should be obvious that the short history of interest and measurement of sexual violence directed in conflict is a mere shadow to the long histories of silence over centuries. It feels very easy to say we should be getting this right – instantly and now. This call is too easy, and this reader has the sense that the critique on the inadequacy of measurement will easily elide to a ready audience that will discount the harms entirely, and so find guilt-free routes to return to the comfort zones of silence and business as usual.
Methodologically, there are many pitfalls in the Report. I will identify only a few here. 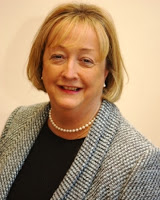 As scholars undertaking domestic violence research in conflict zones have long identified, (I cite particularly to the empirical work of my colleague at the Transitional Justice Institute in Belfast, Professor Monica McWilliams (right)), there is a cogent and traceable relationship between female experiences of domestic violence in violent societies,and the political violence that contextualizes and enables that violence. In the 1990s McWilliams co-authored groundbreaking studies that, by assessing a society experiencing armed conflict, showed the deep linkages between women’s experiences of intimate violence and the broader societal conflict around them. Understanding that link, then, fundamentally connects to what we measure and count as conflict-related sexual violence.
The 2012 Human Security Report, like the reports it critiques, fails to bridge the relationship between intimate and conflict violence or to trace the essential and co-existing relationship between them. This is a fundamental problem of method and substance. There is a repetitious dichotomy perpetrated between intimate violence and conflict violence, in ways that do not undo the central thrust of the Report’s claims about ignoring domestic violence in conflicted societies.
Much attention is paid in the report to variance theory (captured by the idea that the experience and prevalence of sexual violence may vary significantly across conflict sites) pioneered by Yale Political Science Professor Elizabeth Wood and, more recently, by Professor Dara Kay Cohen of Harvard's Kennedy School. Both scholars have done much to illustrate the complexity and unique patterning of conflict-related/political/combatant sexual violence, in a number of disparate conflict zones. Yet, this reader has a deep discomfort with the basis of the empirical work cited.

A selective portion of Cohen’s work, deeply relied upon by this Human Security Report (p. 22 et seq.), relies only on the US State Department's annual country reports for coding and longitudinal measurement of sexual violence data over time. The rather obvious point is that feminist scholars have consistently decried State Department reports, citing the reports' systematic failure to address and note violations of women’s rights – including women's right to sexual autonomy. So we get hollowed-out measurement, in which ‘official’ reports, which consistently and inadequate fail to include women, are then used as the basis for measuring in a scientifically acceptable way how women ‘truly’ experience violence over time and to what degree
While those limits are noted in passing, they do not obviously affect the way in which the Report draws its broader conclusions, or engages with measurement. The gaps seems obvious, and perhaps we are missing something. But the Human Security Report fails to engage in any significant, methodologically rigorous way with the gender failings of the sources it chooses to rely most on.
In closing, there is the obvious point that sexual violence experienced by men and by women ranks consistently as the most underreported crime in most societies. The Human Security Report notes this, but does little more than pay lip service to the implications of this reality for data collection. 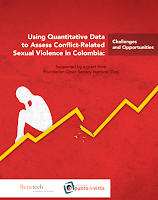 While the Report's critique of over-blown rape statistics is well made, a balanced and rigorous assessment of the data issues would also pay sustained attention to:
► How we address the systemic problem of the underreporting of harms of a sexual nature, and
► How we adjust for it.
To that end, the considered and thoughtful work of Amelia Hoover Green, Françoise Roth and Tamy Guberek, in their report Using Quantitative Data to Assess Conflict-Related Sexual Violence in Colombia: Challenges and Opportunities (2011) (left), provides a compelling counterpoint.
by Fionnuala Ní Aoláin at 6:00 AM

Currently writing a paper on this topic for a class on violent conflict at the Fletcher School -- so happy you wrote this and summarized some of the critique! Would love a follow-up in the future! Thank you for discussing this important topic.

Hi Roxanne,
Quite a few people on Twitter and elsewhere are engaging in critique of this Report (follow the hashtag #HSR2012 if you are on Twitter). I have archived as many online critiques as I have found at http://hsr2012.tumblr.com; if you find others please let me know! I tweet from @drljshepherd.
All best,
Laura