The female academy in international law

Over two decades, the legal academic behemoth’s resistance to feminist international legal analysis, so ably described by Hilary Charlesworth, Christine Chinkin, and Shelley Wright in their seminal article, has, to an extent, subsided.
Arguments suggesting that since the article's publication international legal academia evolved to become less antagonistic and prejudiced to feminist analysis, becoming a tolerant and welcoming domain, possess some traction.
The active presence of this blog, the increasing number of core international generalist journals incorporating articles with and on feminist critique, as well as the appointment of women to some high-profile positions within the international legal order, evidence the change over the past twenty years.
In many ways, the mobilising call of the American Journal of International Law piece not only brought the feminist critique of international law to an audience that desperately needed to pay it attention – academia – but also bolstered the ability of other academics to use feminist critique to ask questions regarding international law’s historical narrative. This success should be celebrated; nonetheless, the necessity and extent of the revolution required, evidenced in the article, remains and nowhere is this more evident as within legal academia itself.

In this post I wish to focus upon the role of female academics, including both those who utilise feminist critique and those who do not, within the international legal order. I consider, first, whether the article's championing of the role of both feminism and women within international law has brought about any changes in establishing different voices within the legal canon, and second, what aspects of academia remain problematic.
Within the broad sphere of legal academia the importance of the female voice remains imperative; however, within international law its existence is even more critical. The presence of the female voice is particularly pertinent on account of:
►  International law's claims towards universality, which have long been critiqued, coupled with the
►  Key role played by academics as potential subsidiary sources of international law makes more than bare representation a necessity.
There have been female international legal academics who have been pioneers in breaking up the hegemonic male academy, such as Professor Suzanne Bastid (above right) of France, about whom IntLawGrrls have posted here and here. By and large, however, international law has been dominated by a succession of male superstars. Dating back to Grotius and Vitoria, carrying on through Oppenheim and Lauterpacht and continuing for much of the post-U.N. Charter era, the most well-known publicists were always male – thus shoring-up the continued domination of international legal academia to a limited Euro-centric/American male jurist. 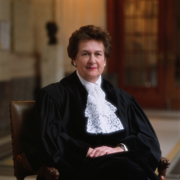 Whenever, to quote Article 38 of the Statute of the International Court of Justice, the ‘the teachings of the most highly qualified publicists of the various nations, as subsidiary means for the determination of rules of law’ were considered, they were always male teachings. Little has changed. The same names re-occur continually, closing off a genuine opportunity for active engagement, by those within the ICJ and beyond, to consider a broader spectrum of legal thought.

The different voice discussed in the Charlesworth-Chinkin-Wright article, while increasingly visible as women become promoted through the ranks of legal academia, remains smaller in proportion to the voice of male colleagues. This means that those ‘highly qualified’ to be cited, or indeed considered for key roles within the international legal order, remain overwhelmingly male.
In the time since the publication of the article, the quantity of women within international legal academia has increased, though perhaps not with the speed one might expect when the high number of female graduates from the world’s law schools are considered. Thus, simply from a numerical perspective, the possibilities of women participating at the highest levels of academia have increased; nonetheless, significant barriers remain.
►  It has not been long since1995, when Judge Rosalyn Higgins (above right) became the first female member of the ICJ.
►  It was not until 2002 that the International Law Commission possessed any female members at all, with currently only 2 women on the 32-person commission.
Further considering that both organisations often feed off legal academia, the emphasis upon the academic community promoting and lifting barriers to women’s participation remains critical. Clearly, beyond emblematic significance, there remains a rather large representational gap within those bodies, bodies that are fundamental to interpreting and developing international law.
The 1991 article highlighted the inadequacies and homogeneity of legal theory and doctrine, and of the structure of international organisations and informal settings. But in taking the lead, it strengthened the female voice in international legal academia. The article and its successors opened up a channel of diversity within legal academia and challenged the status quo. In doing so, they brought a new voice to the table. Nonetheless, the impetus must be maintained if the teachings of the most highly qualified publicists, including Charlesworth, Chinkin and Wright, are to be truly representational of the universality strived for within international law.
by Unknown at 4:45 AM