Tribute to Louis B. Sohn

(My thanks to IntLawGrrls for the opportunity to contribute my remarks in tribute to Louis Sohn delivered at the American Society of International Law Midyear Meeting dinner on October 20 in Athens, Georgia. Photos of Sohn and his wife, Elizabeth Mayo Sohn, courtesy of his former research assistant, Paige Otwell) 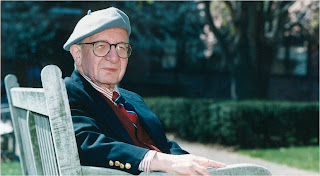 Because of Harvard's mandatory retirement policy, when Louis Sohn turned 70, as far as Harvard Law School was concerned, he became statutorily senile. Dean Rusk learned of Professor Sohn's situation and told him he could come to Athens and teach at the University of Georgia School of Law as long as he wanted to. And so Harvard came to me, in the form of Louis Sohn, or as he was known behind his back by some of the students,

As many of you know, Professor Sohn did not drive. Here in Athens, he and Mrs. Sohn lived on Milledge Avenue, home to the vast majority of sorority houses. Professor Sohn became a fixture on the Milledge Avenue bus, disembarking at his chosen stop with his signature briefcase and beret, flashing that impish grin, wreathed in clouds of perfume.
Despite his deep knowledge of legal history, Professor Sohn was hardly its captive, for he had his other foot firmly planted in the future. We were waiting in the airport together to return to Athens from a meeting and I was amused to see Professor Sohn bring out from his bag reading material that was not some volume of Hugo Grotius but a science-fiction paperback. "Oh," he said,


'I read these all the time. I like to see how civilizations on other planets and galaxies go about resolving their problems. It might be helpful down here.'

Another aspect of his hope for the future was his careful nurturing of his students. We knew we were his top priorities; he never cancelled a class because he was needed in Washington or New York. The world had to wait on us. Sometimes this nurturing process could be a bit painful, as when students discovered that he not only read and made comments in the text of the first drafts of their term papers, he also corrected punctuation in the footnotes. But we sensed he was making an investment in us for the long term.
For those of use who were his students, we knew that when we went to his office, we would find him nestled among his books. Every horizontal surface in his office would be covered with books and documents and reports. It wasn't that he didn't know how to shelve them; we learned that these piles of documents were all his current projects. To answer our questions, he would zero in on a stack with the practiced eye of a stratigrapher and select a document that was directly pertinent to the problem we brought with us through the door. As I said, all the horizontal surfaces were occupied except for one: there was always a chair open and available for his students.
Those of us who were his students and who now are privileged to stand before our own students have in Professor Sohn an impeccable model for carrying out our responsibilities as educators. Those of us who now spend our professional lives practicing in the realm of international law because of his influence value his insight and encouragement of our endeavors to expand and adapt its practice. 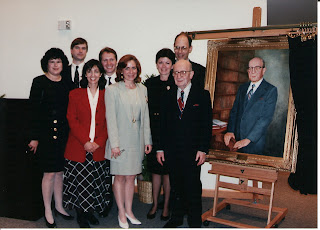 Professor Sohn's open-minded enthusiasm for international law and for its hopeful possibilities serves as a beacon for all of us who trail along in his wake. And, like his example, we are called to go forth as he did, with joy and hope and love.
by Unknown at 4:30 AM

Thank you for these memories of Louis Sohn. Some are familiar, some are new (I never knew we shared a fondness for science fiction).

I always like to describe Louis as one of my engineering professors - he was one of the instructors in a joint Harvard Law-MIT Engineering class in Ocean Engineering and Law. But over time I realized there was more truth than humor in that description because Louis was truly an engineer of international regimes. He approached international political systems with the same respect as an architect of buildings or a designer of bridges, understanding the tensions and strengths and designing legal and political structures to incorporate them. It was Louis who taught me, as an engineer, how to find my place in the development of the deep seabed regime of the law of the sea convention, an opening that led to a lifetime of work on ocean law and policy.

The impish smile, the beret and an apple at a working lunch at the UN. They are warm memories and I thank you for refreshing them for me.