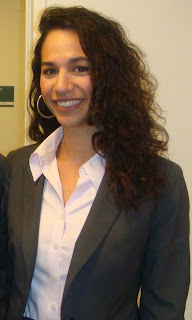 It's our great pleasure today to welcome Noura Erakat (right) as an IntLawGrrls contributor.
Noura, a human rights attorney and writer, is currently a Freedman Teaching Fellow at my home institution, Temple University, Beasley School of Law in Philadelphia.  She is also the US-based Legal Advocacy Coordinator for Badil Center for Palestinian Refugee and Residency Rights.
Noura has taught International Human Rights Law and the Middle East at Georgetown University since Spring 2009. Most recently, she served as Legal Counsel for a congressional subcommittee chaired by U.S. Rep. Dennis J. Kucinich (D-Ohio).
She has helped to initiate and organize several national formations, including Arab Women Arising for Justice and the U.S. Palestinian Community Network.
Noura has appeared on Fox’s “The O’ Reilly Factor,” NBC’s “Politically Incorrect,” MSNBC, Democracy Now, and Al-Jazeera Arabic and English. Her publications include: "Litigating the Arab-Israeli Conflict: The Politicization of U.S. Federal Courts" in the Berkeley Law Journal of Middle Eastern and Islamic Law, "BDS in the USA: 2001-2010," in the Middle East Report, and "U.S. vs. ICRC-Customary International Humanitarian Law and Universal Jurisdiction," forthcoming in the Denver Journal of International Law & Policy. She is a Co-Editor of Jadaliyya.com. You can follow her on Twitter at @4noura.
Noura's introductory post below responds to comments on the doctrine of responsibility to protect delivered by Patricia O'Brien, Under-Secretary for Legal Affairs and United Nations Legal Counsel, at the American Society of International Law Midyear Meeting earlier this month. In an IntLawGrrls post yesterday, Patricia (who'd posted on the same issue this past spring) contributed those remarks in full.
Noura dedicates her post to Hoda Shaarawi (1879-1947), an Egyptian feminist leader and the first Egyptian advocate of women’s rights. In Noura's words:

'She strove to raise awareness among Egyptian women, calling on them to claim their rights. Not only did she study in Europe and accompany her husband to many political meetings, but in 1923 she removed her face veil in public. She led the first women's first street demonstration, the first women's social service organization, and published the first feminist magazine.'

Today, Shaarawi (left) joins our list of transnational foremothers.
Heartfelt welcome!
by Jaya Ramji-Nogales at 7:00 AM