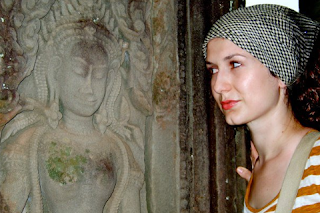 It's our great pleasure to welcome Tess Davis (right) as an IntLawGrrls contributor.
Tess is the Executive Director of the Lawyers' Committee for Cultural Heritage Preservation, a not-for-profit institution based in Washington, D.C. As posted here and here, a focus of her work at the Lawyers' Committee has been to fight illicit trafficking in Cambodian antiquities – a fight that includes litigation against Sotheby's auction house. She's the author of "Supply and demand: exposing the illicit trade in Cambodian antiquities through a study of Sotheby’s auction house," published last year in the journal Crime, Law & Social Change.
In her introductory post below, Tess explains how her interests in cultural heritage and her experiences in Asia interweave with "From Plunder to Preservation: The Untold Story of Cultural Heritage, World War II, and the Pacific," the Lawyers' Committee conference set for November 8 and 9 in Washington.
Her decade-long efforts against pillage of ancient sites and trafficking of artifacts in Southeast Asia have included several projects, for example: creation of a heritage law database; establishment of a legal internship program in Cambodia; an exhibition at Angkor Wat about threats facing the temple; a hotline for the public to report archaeological discoveries or looting; and publication of a children’s book on preservation, If the Stones Could Speak.
Pleased to say that Tess earned her J.D. degree from the University of Georgia School of Law; she also received a B.A. degree in archeology magna cum laude from Boston University.
Before joining the Lawyers' Committee, Tess worked for Heritage Watch in Cambodia, first as Project Coordinator and finally Assistant Director; she now serves on that NGO's Advisory Board. Her career began at the Archaeological Institute of America.
Tess is Vice Chair of the American Society of International Law Cultural Heritage and the Arts Interest Group. She is admitted to the New York State Bar, Third Department, and is a member of the New York State Bar Association.
Heartfelt welcome!
by Diane Marie Amann at 6:00 AM