Why come to the ASIL Midyear Meeting? Atlanta.

Up in my series of posts on why you should attend the 2012 American Society of International Law Midyear Meeting:
Atlanta.
Have posted before about the Midyear Meeting, to be held here in Georgia October 19 to 21. It's a meeting for which yours truly has the honor of serving as the meeting's co-chair, along with my colleague Charlie Hunnicutt, Senior Counsel at the Thompson Hine law firm and a fellow former ASIL VP:
► An early post gave details about keynote speakers – Patricia O'Brien, Under-Secretary for Legal Affairs and U.N. Legal Counsel, and Harold Hongju Koh, Legal Adviser, U.S. Department of State – as well as a blue-ribbon panel of international arbitration experts, a career mentoring event, and the scores of Research Forum presenters from around the world. You can see the updated schedule, and register, at the Midyear Meeting website.
► A more recent post sang the praises of Athens, hometown to the University of Georgia School of Law, which will host the latter 2 days of the Midyear Meeting.
Today's post tells of the other host city, Atlanta.
Center of the country's 9th largest metropolitan area, with more than 5 million residents, Atlanta's also a center of business and culture in the American Southeast. Its transportation hub, Hartsfield-Jackson Atlanta International, has long been the country's busiest airport.
There's much to do in this city. This 'Grrl found most moving her visit to the Martin Luther King, Jr. National Historical Site. In addition to exhibits like that at left, the site features the civil rights leader's birth home and the Ebenezer Baptist Church, from which Dr. King delivered some of his powerful sermons.
On the lighter side, there's downtown's world-class Georgia Aquarium (above right), and close by, the World of Coca-Cola museum/funpark in downtown Atlanta.
Atlanta is home to numerous educational institutions.
ASIL Academic Partner Emory University School of Law is one of them.

At our Midyear Meeting conference dinner in Athens on October 20, we'll be paying tribute to Emory Law Professor David Bederman (right), the American Journal of International Law editor and U.S. Supreme Court advocate who passed away last year at age 50.
Atlanta's John Marshall Law School is also a meeting sponsor, as are the Atlanta International Arbitration Society, the Association of Corporate Counsel-Georgia, the International Law Section of the State Bar of Georgia, and the Atlanta-officed firms of  Arnall Golden & Gregory, King & Spalding, Sutherland Asbill & Brennan, Thompson Hine, and Troutman & Sanders.
An Atlanta corporate anchor is, of course, the Coca-Cola Co. (hence that museum above). We're honored to count Coke as a meeting sponsor; indeed, it's host to all of Friday's events: 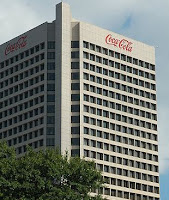 Register for the Midyear Meeting here. Hope to see you soon!
by Diane Marie Amann at 6:00 AM