The International Court of Justice will webcast live its judgment in the case concerning the Territorial and Maritime Dispute (Nicaragua v. Colombia).
The decision will be announced next Monday, November 19, at the Peace Palace in The Hague, Netherlands. The public session begins at 3 p.m. Hague time (9 a.m. Eastern time).
If you can't make it to The Hague, you can watch the hearings  live online. Here's the how-to.
After the fact, the hearings will be available in the multimedia archive here.
As detailed at paras. 145-63 of the ICJ's 2011-2012 annual report, the case arises out of a dispute related to the western Caribbean off the coast of the 2 countries over maritime boundaries and title to certain islands.
While awaiting Monday's webcast, you might want to check out the archival gem I just stumbled over: 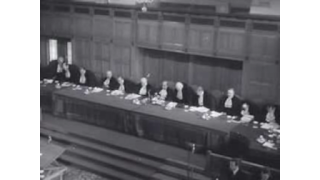 video of a Dutch newsreel of the 1st oral arguments before the ICJ, on Feb. 28, 1946, in the Corfu Channel case. Prominent on the bewigged British counsel table was Sir Hartley Shawcross, who also served as Chief British Prosecutor at the 1st Nuremberg trial. Still image of the Corfu hearing at right; video here.
by Diane Marie Amann at 1:00 PM