BP Guilty Plea: Vindication or Drop in the Ocean? 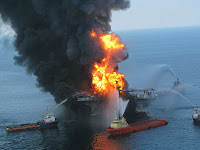 Four billion dollars.
That is the total of the criminal fines the Department of Justice has assessed against BP for its criminal actions associated with the 2010 Deepwater Horizon spill, the worst environmental disaster in US history. As described in posts available here, the 2010 explosion (left) and oil spill killed 11 people, and sent millions of gallons of oil gushing into the Gulf of Mexico. (photo credit)
BP will plead guilty to 14 criminal charges related to the disaster, including twelve felonies and two misdemeanors:
► Eleven of the felony guilty pleas are for BP’s criminal violations of 18 U.S.C. § 1115 (Misconduct or Neglect of Ship Officers), for negligence that resulted in the 11 worker deaths. The twelfth felony guilty plea is for violation of 18 U.S.C. § 1505 (Obstruction of Congress), by misrepresenting the flow rates from the wells – the company reported flow rates of 5000 barrels a day, despite internal BP data showing flow rates at least an order of magnitude greater.
► The misdemeanor guilty pleas are for violations of the Clean Water Act, 33 U.S.C. §§ 1319(c)(1)(A) &1321(b)(3), and the Migratory Bird Treaty Act, 16 U.S.C. §§ 703 and 707(a).
Under the plea deal, BP will pay $1.256 billion in criminal fines, $2.394 billion for remediation efforts, and $350 million to the National Academy of Sciences.
In a parallel proceeding resolved along with the criminal charges, BP also agreed to $525 million to settle civil charges, brought by the U.S. Securities and Exchange Commission, for misleading regulators and investors about the flow rate of oil from the well. With the SEC settlement, the aggregate amount of the deal announced Friday is approximately $4.5 billion, with payments scheduled over a period of five years.
Four and a half billion dollars, by many measures, is a lot of money.
It is more than the nominal gross domestic product of 44 nations, including Belize and Montenegro, and roughly on par with that of Kyrgyztan.
It is well over half of 2011 budget of the U.S. Environmental Protection Agency, which is $8.7 billion.
However, $4.5 billion is significantly less than the $7.7 billion profits BP reported in the fourth quarter of 2011.
The criminal penalty assessed for the worst environmental disaster in the United States' history did not even amount to one quarter’s profit for the main perpetrator!
Context is everything.
Whether one views the goal of criminal punishment as retribution or deterrence, it is difficult so see how the proposed plea deal and penalty accomplish the goal. Eleven people are dead because of BP’s criminal actions. Untold numbers of fish, endangered turtles, marine mammals, and seabirds perished because of BP’s criminal actions.