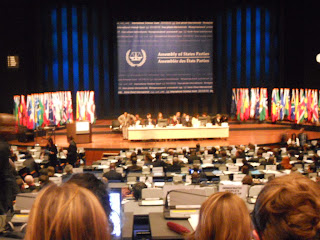 THE HAGUE, the Netherlands – The 11th Session of the Assembly of States Parties of the International Criminal Court has begun.
The annual meeting of the Assembly of States Parties, the ICC's legislative and oversight body, convenes representatives from governments, civil society, and the various organs of the ICC. This year’s session, which opened yesterday (right) with a moment of silence, will take place through next Thursday. The meeting also serves as a commemoration of the 10th anniversary of the entry into force of the Rome Statute of the ICC. Along with other IntLawGrrls contributors, I look forward to covering various events as the 11th Session (for which the provisional agenda may be found here) progresses. 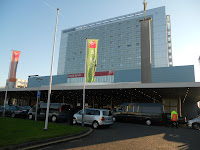 Taking place at the World Forum Convention Center (left), the 11th Session began with uncharacteristic Dutch weather of clear, blue skies.
The President of the Assembly of States Parties, Tiina Intelmann of Estonia – who was elected last December as the 1st woman in this role – presided over the initial plenary. As detailed below, events yesterday included officials' statements, election of 1 woman and 8 men to a nominations advisory committee, and the 1st 3 rounds of voting for a new ICC Deputy Prosecutor.
Officials' statements
In its 10th year, the International Criminal Court and its stakeholders are poised to reflect backward on the court’s history and to look forward to its future.
In the past year, Judge Sang-Hyun Song of the Republic of Korea was elected for a 2d 3-year term as the President of the court. The Court also witnessed the June swearing-in of its 1st woman Chief Prosecutor, Fatou Bensouda of The Gambia,who had contributed her December 2011 election-day speech as an IntLawGrrls post. Furthermore, as IntLawGrrls have posted, the court issued its first verdict, in Prosecutor v. Thomas Lubanga Dyilo.
Song and Bensouda, along with Silvana Arbia, the ICC Registrar, each provided statements to the Assembly. All three spoke of the achievements and concerns of their respective organs, and all 3 further appealed to states to continue supporting the court.
► Song said:


'This morning we commemorated the 10th anniversary of the International Criminal Court to her majesty Queen Beatrix of the Netherlands…We have achieved a great deal together but we are aware that there is still a long way to go for the Rome Statute and for the ICC to be fully imbedded in the international community…The 10th anniversary is the perfect opportunity to recommit ourselves to these goals.'


'Today the ICC is busier than ever at all levels. This makes it all the more important for us to reflect carefully on the experiences we have accumulated so far and to look for ways to improve the way we work.'

► Bensouda took the floor, her 1st time addressing the Assembly in her new capacity. She reported that the previous five months were “challenging, taxing, but fruitful.” Bensouda said she was particularly grateful to have inherited a well-functioning office with a collegial staff. She outlined the plan of her office, included the following priority areas:
Detailing her efforts to liaise with states, Bensouda spoke of the court's role in seeking state support. In Africa in particular, she has visited countries such as Senegal, Namibia, South Africa, Nigeria, Côte d'Ivoire, and Kenya, in an effort to demonstrate how the court is contributes to the maintenance of peace on that continent.
Echoing the sentiments of President Song, Bensouda cautioned,


'Even as we celebrate the successes of the last ten years, we should not be blind to the challenges ahead.'

Furthermore, she said, what has been done and what is to be done would not be possible without the support of states parties. Arbia also stated that particular attention should be paid to the host state, the Netherlands, for its contributions to the court. The Registrar concluded with an appeal on behalf of victims, conveying her vision for increased victim participation, reparations, and restorative justice.

Adivsory Committee on Nominations
Other agenda items included the election of the Advisory Committee on Nominations, which will serve as advisors in future ICC elections.
One woman, Dr. Mónica Pinto of Argentina, the law dean at the University of Buenos Aires, was elected – she was among only 2 women candidates on the overall list of 14. Joining her on the committee will be: law professor Leonardo Nemer Caldeira Brant of Brazil; Hiroshi Fukuda of Japan, formerly a Justice of that country's Supreme Court; Philippe Kirsch of Canada, who served as the ICC's 1st President; Daniel David Ntanda Nsereko of Uganda, a former ICC judge now serving at the Special Tribunal for Lebanon; Ernest Petrič of Slovenia; Árpád Prandler of Hungary, an ad litem Judge at the International Criminal Tribunal for the former Yugoslavia; Bruno Simma of Germany, a law professor and former judge of the International Court of Justice; and Raymond Claudius Sock of Gambia, a Judge of that country's Supreme Court.

Deputy Prosecutor
The final agenda item for yesterday's plenary was the election of the Deputy Prosecutor, a position open since the former Deputy, Bensouda, became the ICC Prosecutor. Pursuant to Article 42(4) of the Rome Statute, the Assembly is to elect through secret ballot one Deputy Prosecutor from a list of three nominees. The elected Deputy must secure an absolute majority of the votes. As previously posted, the candidates are: Paul Rutledge of Australia; James Stewart of Canada; and Raija Toiviainen of Finland.
Ballots were distributed late in the evening, and after 45 minutes, Intelmann revealed that there had been 88 valid ballots with 1 abstention. Rutledge received 13 votes; Stewart, 45; and Toiviainen, 29 votes. No candidate received the requisite absolute majority of 61 votes.
The same held for the 2d and 3d ballots.
After 20 minutes of voting for the 1d round, there were 85 paper ballots and 1 abstention, resulting in 10 votes for Rutledge; 48 for Stewart; and 26 for Toiviainen.
The 3d round of the evening resulted in 83 valid votes and 1 abstention. Rutledge received 7; Stewart, 49; and Toiviainen, 26.
No candidate having received the requisite majority before the meeting adjourned for the day, balloting will continue tomorrow afternoon.
Although the anticipated election of a new Deputy Prosecutor did not occur, overall it was a productive opening day.
by Unknown at 3:00 AM