On Friday, the Appeals Chamber of the International Criminal Tribunal for the former Yugoslavia announced its judgment in Prosecutor v. Ante Gotovina, acquitting Colonel Generals Ante Gotovina (left) and Mladen Markač (below right) of all charges and ordering their release.

This case, the subject of earlier posts here, here and here, focused on Operation Storm, the Croatian operation to re-take the Krajina region in August 1995.
Prosecutor v. Gotovina is one of very few ICTY cases focused on complex targeting decisions involving the use of artillery against a range of military objectives in populated areas during a sustained assault.
The Office of the Prosecutor alleged that Gotovina launched unlawful attacks against Knin, the capital of the self-proclaimed Republic of Serbian Krajina, and three other nearby cities, and that these attacks formed the foundation of a joint criminal enterprise to ethnically cleanse the region of Serbs. 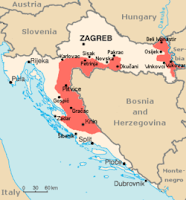 Because Knin was the operational command and control center of the Republic of Serbian Krajina, the case thus centered on actions during "force on force" combat operations. (credit for map showing the Krajina in red)
In April 2011, the Trial Chamber sentenced General Gotovina to 24 years for war crimes and crimes against humanity, on a joint criminal enterprise theory of liability.  The judgment quickly garnered significant attention in the academic and policy communities, including the report of an experts roundtable held at Emory International Humanitarian Law Clinic, for which I serve as Director, and an amicus brief submitted (but not admitted) by a group of international operational law experts.
Trial Chamber I, composed of Presiding Judge Alphons Orie (Netherlands) along with Judges Uldis Ķinis (Latvia) and Elizabeth Gwaunza (Zimbabwe), had found:
►  First, that all targets subjected to deliberate attack in Knin were lawful military objectives, and that the means (weapons) and methods (tactics) used in attack were not unlawful. However, it then applied a 200-meter radius of error around each lawful military objective as the test for determining whether the effects of each artillery shell could be attributed to a lawful attack. Finding that a mere 5% of the shells fell outside this 200-meter radius, the Trial Chamber nonetheless inferred the intent to launch unlawful attacks on civilians.
► Second, that limited harassing fire at the apartment of the President of the Republic of Serbian Krajina violated the principle of proportionality. In so finding, the Trial Chamber did not indicate how a small number of projectiles and no resulting civilian casualties demonstrated an anticipated excessive impact on civilians compared to the expected value of disrupting enemy command and control.
These two findings drove the chamber's conclusion that Croat attacks were directed at civilians and were intended to terrorize the civilian population, and thus served as the basis for the conviction for war crimes and crimes against humanity as a joint criminal enterprise.

In its judgment issued Friday, the Appeals Chamber overturned the Trial Chamber judgment. The five-member panel comprised Presiding Judge Theodor Meron (at right, of the United States) and Judges Carmel Agius (Malta), Patrick Robinson (Jamaica), Mehmet Güney (Turkey), and Fausto Pocar (Italy). It categorically rejected both the findings of the Trial Chamber and the Trial Chamber's conclusion that the Office of the Prosecutor had met its burden of proving guilt beyond a reasonable doubt.
First, the Appeals Chamber rejected the 200-meter radius of error (a unanimous conclusion, although there were dissents on other matters) and held that, as a result, there was no basis for the Trial Chamber's finding of unlawful attack on civilians in Knin or three other towns at issue. It stated:

'[T]he reversal of the Impact Analysis undermines the Trial Chamber's conclusion that artillery attacks on the Four Towns were unlawful. The Trial Chamber's reliance on the Impact Analysis was so significant that even considered in its totality, the remaining evidence does not definitively demonstrate that artillery attacks against the Four Towns were unlawful.'

From there, the Appeals Chamber unraveled the Trial Chamber judgment: with no unlawful attack on civilians, there could be no predicate crime for the crimes against humanity conviction or for the joint criminal enterprise conviction.
The outcome, by any standard, was remarkable -- reversals for factual insufficiency are rare, in both international and domestic criminal jurisprudence.
The case, and the Appeals Chamber judgment in particular, raises a host of interesting questions, and is an essential read for anyone interested in the intersection of international humanitarian law, military doctrine, and international criminal law. Among these questions, here are two to focus on:
► The Appeals Chamber judgment more accurately highlights and represents the delicate relationship between the real-time implementation of operational law and the post-hoc criminal accountability process.
The law of targeting is a complex balancing of the key law of armed conflict principles of distinction, proportionality, and precautions.  Reducing this balancing to a mathematical examination of shells fired, location of impact, and number of casualties undermines not only the application of the law in the instant case, but also the implementation of the law in future operations.
By rejecting the Trial Chamber's seemingly myopic effects-based approach, the judgment reinforces the importance of assessing criminal culpability for acts taken in the course of military operations based on the totality of the circumstances and the intent and actions of the commander, rather than based on the effects of the operations.  Perhaps more important, it affirms that any such assessment cannot be an exercise in retrospective "Monday morning generalship", but must be based on the situations confronting the commander when his or her decisions were made.
► The judgment also points to the fundamentals of the criminal process -- relevant in the high stakes arena of international criminal justice just as in ordinary domestic cases.
In particular, the Appeals Chamber judgment ultimately rested on the failure of the ICTY Office of the Prosecution to meet its burden of proof with regard to the illegality of the attack.  Once the theory relied on by the Trial Chamber was rejected, the Appeals Chamber concluded that the totality of the evidence was insufficient to support any reasonable finding of culpability, including any based on the alternative modes of liability that it examined.  The prosecution's burden of proof -- guilt beyond a reasonable doubt and the exclusion of all rational alternatives other than guilt -- is a demanding challenge in the context of unlawful targeting allegations, but cannot be diluted merely because the "fog of war" heightens the challenge.
This case will remain an important one at both the complex level of the application of targeting law in the courtroom and the intersection of military doctrine and international humanitarian law, and at the more mundane level of the basic requirement in any criminal adjudication that the prosecution satisfy the burden of proof in demonstrating the criminal culpability of the accused.

(As part of our Gotovina forum, in another IntLawGrrls post today, Milena Sterio offers her analysis of the Appellate Chamber's decision.)
by Laurie Blank at 4:30 AM