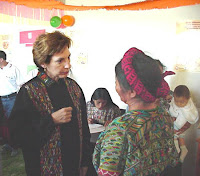 'No one has sat back to say, "What are our objectives?" ... The model has become, we will go to dangerous places and transform them, and we will do it from secure fortresses. And it doesn’t work.'


– Prudence Bushnell, who served as U.S. Ambassador to Kenya on Aug. 7, 1998, the date of the bombings of U.S. embassies there and in Tanzania that killed more than 200 persons and injured more than 4,000. Bushnell was quoted in a Sunday New York Times article by veteran reporter Robert F. Worth, the online title of which is "Can American Diplomacy Ever Come Out of Its Bunker?" Occasioning these questions, of course, is the attack in Benghazi this past September 11 that left Christopher Stevens, U.S. Ambassador to Libya, and 3 others dead. (prior post) More than 2 months later, officials and pundits in Washington continue to pursue blame for a perceived failure, as Worth reports. He offers an alternative account, quoting numerous U.S. diplomats who fear that exponentially stepped-up security – 150 security officers in 1985, 900 today – will prevent diplomats from engaging in the kinds of cultural exchanges long seen as the heart of their jobs. (credit for 2002 photo of Bushnell, at left, talking with a mother at a nutrition center, in her subsequent posting as U.S. Ambassador to Guatemala)
by Diane Marie Amann at 6:00 AM