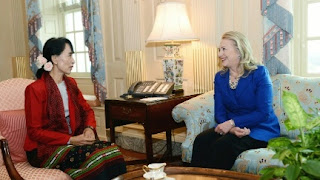 'Some say that Clinton diluted her energy and failed to achieve any signature triumphs, such as an end to the Syrian crisis. Others argue that through a thousand lesser-known efforts and initiatives, she has achieved nothing less than a transformative shift toward a more effective and modern American diplomacy.'

–  Reporter Stephanie McCrummen, writing in today's Washington Post about U.S. Secretary of State Hillary Clinton. McCrummen's thoughtful survey of Clinton's approach these last 4 years to her position as the United States' top diplomat –  a position from which Clinton has said she soon will resign –  is well worth a read. (credit for State Department photo of Clinton, at right, with Aung San Suu Kyi, winner of the 1991 Nobel Peace Prize and, since this past April, a member of the Parliament of Myanmar)
by Diane Marie Amann at 2:00 PM