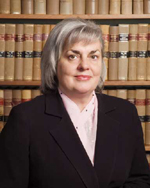 On this day in ...
... 2005, the appointment of Susan Maree Crennan to the High Court of Australia took effect. The headline in the Melbourne-based Age newspaper proclaimed:


'A Victorian woman has become just the second female judge appointed to the High Court.'

The adjective referred to Crennan's location, in the Australian state of Victoria, for which Melbourne is the capital.  At the time Crennan (prior IntLawGrrls posts) was a judge on the Federal Court of Australia. Appointed Queen's Counsel in 1989, she'd also served inter alia as President of the Australian Bar Association and as a Commissioner for Human Rights. The only other woman ever to have served, from 1987 to 2003, had been Mary Genevieve Gaudron. Today 3 women serve on the country's High Court – Crennan, Susan Mary Kiefel, and Virginia Margaret Bell.