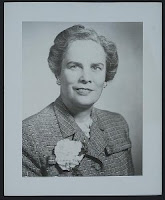 On this day in ...
... 1904, born in Minneapolis, Minnesota, was a granddaughter of the founder of the Pillsbury Flour Mills Co. A couple years after graduating Phi Beta Kappa from Smith College, where she majored in French, she married a textile manufacturer named Oswald Bates Lord. Living with her husband and sons (one, Winston Lord, would become a U.S. Ambassador), Mary Pillsbury Lord (left) threw herself into volunteer work. In World War II, she toured Army installations throughout the world in her capacity as chair of the National Civilian Advisory Committee of the Women's Army Corps. In 1947, she organized and chaired the U.S. Committee for UNICEF, and in 1953, by appointment of President Dwight D.  Eisenhower, for whom she'd campaigned, Lord succeeded Eleanor Roosevelt as the U.S. representative to the U.N. Human Rights Commission. Later she was appointed a U.S. representative to the U.N. General Assembly. After completing that post, she continued to be active in international affairs until her death in 1978. A year after, she was honored posthumously with the Freedom Award of the International Rescue Committee, which she had served as president. Her papers are available here and here.