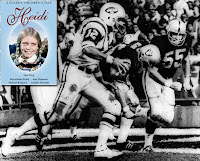 On this day in ...
... 1968, occurred an event worth recalling as we in America approach the sports-viewers' watchfest of nonstop footbowls. With just over a minute left to play in a televised regular-season game in which the New York Jets had just gone ahead of the Oakland Raiders by a narrow margin of 32-29, the network switched over to its preplanned programming, a film version of Heidi. As the girl's story unfolded in the Alps of NBC, back in California the pigskin switched sides multiple times. Those final, untelevised, 65 seconds resulted in a 43-32 win for the Raiders. Echoes of the outcry of fans – fans of football, that is – may still be heard, in the form of post-Heidi contract clauses and other safeguards that assure this choice never will be made again. (image credit)