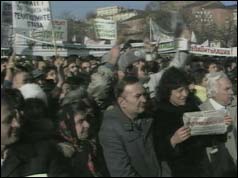 On this day in ...
... 1989, the BBC reported that "[m]ore than 50,000 people have taken to the streets of Sofia in Bulgaria demanding political reform." (photo credit) The pro-democracy march was the largest in the country since World War II. It came just 8 days after the ouster of Todor Zhivkov, Bulgaria's Communist leader, who eventually would be convicted of embezzlement and given a 7-year sentence. Bulgaria's path to democracy "was wracked by political instability and strikes," according to the BBC.  In 2007, Bulgaria became a member state of the European Union.