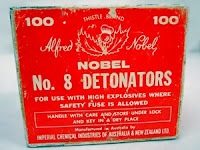 On this day in ...
... 1867 (145 years ago today), Alfred Nobel patented dynamite. Born in Sweden 34 years earlier, Nobel had begun his career as an industrialist, a maker of bridges and other structures – the construction of which often required blasting through rock, a requirement that led Nobel to the experiments out of which dynamite was created. On this day he secured U.S. patent number 78,317 for his invention, the destructive power of which he continued to improve. ( photo credit) Used in times of war and peace alike, the invention left him with an immense fortune. In the will he signed on this same date in 1895 in Paris (28 years to the day after he'd obtained the patent), Nobel funded the establishment of annual Nobel Prizes, to be apportioned as follows: 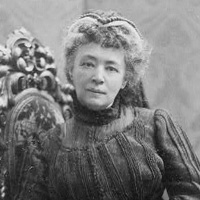 This development was due in no small part to an abundance of correspondence with Bertha Sophie Felicita von Suttner (right), who worked briefly as a secretary for Nobel, and then, as detailed in this fascinating account, wrote Nobel frequently, advocating her campaign for global peace. (photo credit) In 1905, 9 years after Nobel's death, she would become the 1st woman to win the Nobel Peace Prize.