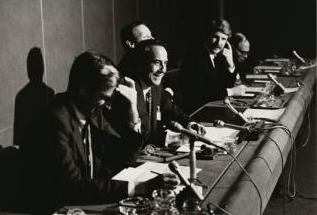 On this day in ...
... 1982 (30 years ago today), began a GATT Ministerial Meeting in Geneva, Switzerland. There representatives from 88 countries party to the 1947 General Agreement on Tariffs and Tariffs, reviewed recent failures in that GATT system and endeavored "to launch a major new negotiation." This effort failed over disagreements about agriculture. (credit for photo of U.S. Senators Robert Dole (R-Kansas) and John Danforth (R-Missouri), among others, at this meeting) In hindsight, however, the meeting proved the seed for the Uruguay Round; out of that multiyear round of trade negotiations grew the establishment in 1995 of the World Trade Organization.