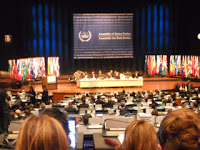 Besides the matters I discussed in my post yesterday, additional formal events of the 11th Session of the International Criminal Court Assembly of States Parties (ASP) are worth examining; specifically, the elections which were held for the position of ICC Deputy Prosecutor, as well as for committee memberships.
But as I mentioned in a post filed from The Hague last week, some of the less formal activities and discussions are among the most significant aspects of the ASP. These include two I'll discuss in today's post: the attention paid to gender issues and the deepening relations between civil society and the court.

Elections and transparency
James Stewart of Canada was elected to the position of Deputy Prosecutor (Prosecutions) for a nine-year term, and although the election ended up being more hotly contested than anticipated, most attendees seemed pleased with the result.
Stewart has extensive domestic criminal prosecution experience, in addition to having spent eight years combined with the International Criminal Tribunals for Rwanda and for the former Yugoslavia. Article 42(2) of the Rome Statute does allow for the election of more than one Deputy Prosecutor. In the past, the Court had filled the position of Deputy Prosecutor for Investigations, held by Serge Brammertz from 2003 to 2007. But that post has remained vacant since the resignation of Brammertz, now the ICTY Prosecutor; given financial constraints, will likely remain so.
States-parties also elected five members of the board of directors of the Trust Fund for Victims and, as Jing Geng posted, nine members of the newly established Advisory Committee on Nominations, a body of experts charged with providing advice on the qualifications of individuals nominated as judges for the ICC. Candidates for the Advisory Committee were put forth by a working group comprised of five members. Although the elections were by consensus, Italy and the Netherlands both made statements expressing their displeasure at the lack of transparency as to how candidates for the Advisory Committee were selected.
These complaints echo those of many state and civil society delegates regarding the product of working groups.
Working groups are established to do the necessary legwork leading up to the general sessions, since time is so constrained at the ASP and it is difficult to negotiate substantive details in a large setting. Having invested much time and effort in this preparatory work, however, there seems to be substantial pressure at the ASP not to undo it all and shatter any fragile consensus that has been forged. Thus, working group decisions are increasingly being adopted wholesale, or with only minor amendments, by the entire ASP.
While this procedure may promote efficiency, the obvious drawback is a lack of representation in the actual decision-making. 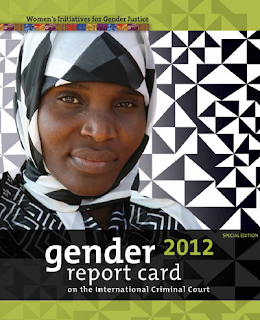 Working group members may not hold views that are representative of the other states-parties, and there is very little opportunity when the work is done in such a limited forum for genuine dialogue among states or with civil society representatives. At the same time, these groups are not as transparent about their working process or decision-making as they ideally could be, making it very hard to monitor their activities or understand their results.

Gender issues
It appears that attention to gender issues has essentially been institutionalized at the ASP.

The lunchtime session on “Preventing and Prosecuting Crimes of Sexual Violence in Conflict and Post-Conflict Situations,” along with the launch of the 2012 Gender Report Card of the Hague-based NGO Women's Initiatives for Gender Justice, were among the ASP side events that garnered the most attendance, including by representatives of states parties representatives.
ICC Prosecutor Fatou Bensouda repeatedly recognized civil society’s advocacy for the prosecution of gender crimes, and she has committed to prosecuting them in every case for which she can find relevant evidence. But as Women’s Initiatives for Gender Justice has emphasized, gender crimes are the most vulnerable to judicial dismissal at the ICC. Brigid Inder, Executive Director of Women’s Initiatives, said she views her new role as Bensouda’s Special Gender Advisor as ensuring that the prosecution puts forth the best possible argumentation to ensure these crimes hold up.

Civil society and the court
Working relations between organs of the court and civil society continue to deepen.
Over the course of the ASP, civil society delegates had the opportunity for the first time to meet as group, for an hour each, with ICC officials – not only Bensouda and Inder, but also ICC President Sang-Hyun Song.
Over the course of the next year, we should see some concrete results of Bensouda’s commitment to render the Office of the Prosecutor even more transparent, efficient, and responsive to civil society. The Office of the Prosecutor has been working on a policy paper on gender-based crimes, to be issued by next summer, and Bensouda has committed to issuing a second policy paper on crimes involving children in the future. She also said she plans to release a comprehensive report on preliminary investigations that were conducted in 2012.

Prospects for 2013
In the coming year, there will be a continued focus on the substantive issues discussed during this year’s ASP. But attention will also be directed toward institutional structures and procedures, and toward the work conducted during inter-sessional meetings. As a working body entering its second decade of existence, the ASP will also continue to grow and adapt, both in response to its member states and to civil society as a whole. Furthermore, there will soon be significant changes in some leadership positions.
By next year’s ASP, ICC judges will have elected a new Registrar for the Court. President Song nominated 11 candidates for the position out of the 30 candidates who were found to be qualified. The current registrar, Silvana Arbia of Italy, is eligible for one more five-year term, and is among the eleven nominees. More information is available here.
The next ASP will also be the last with the current Bureau leadership, and states and civil society will soon be thinking about who will succeed those leaders. Since individual leaders can make an enormous difference in the work of any institution, these selection processes will be worth watching closely.
Next year’s ASP will take place from November 20 to 28, again in The Hague.
by Unknown at 6:00 AM