“She makes me ashamed to be a woman”: ICTR's genocide conviction of Pauline Nyiramasuhuko

(My thanks for the opportunity to contribute this guest post, which forms Part 2 of a 2-part IntLawGrrls series on women accused of international crimes. Part 1 is here.) 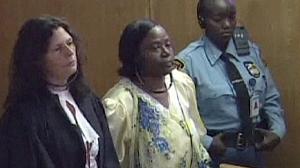 Much of the literature on gender and conflict focuses, appropriately, on women as victims of violence. Women, however, may also act as agents of violence, including mass atrocity, during conflict situations.
A paper I am writing explores this latter reality through the conviction of Pauline Nyiramasuhuko, Rwanda’s former Minister of Family and Women’s Development. Trial Chamber II of the International Criminal Tribunal for Rwanda sentenced Nyiramasuhuko (above, center) to life imprisonment on June 24, 2011. (credit) At the time of her conviction, she was 65 years old.
I first prepared this paper for a fantastic conference on Gendering Conflict and Post-Conflict Terrains that IntLawGrrls contributors Fionnuala Ní Aoláin, Naomi Cahn and Dina Haynes organized at the University of Minnesota Law School this past May. Drawing from wonderful feedback generated at the conference, the paper was updated. Now available at SSRN, the paper, entitled "'She makes me ashamed to be a woman': The Genocide Conviction of Pauline Nyiramasuhuko, 2011," will appear in the Michigan Journal of International Law next year.
Nyiramasuhuko was prosecuted jointly with five other defendants, including her son, Arsène Shalom Ntahobali (who also was given a life sentence). All the defendants were from Butare, a préfecture in southern Rwanda. The defendants became colloquially known as the “Butare Group” or the “Butare Six.” The other four defendants received sentences of 25 years, 30 years, 35 years, and life.
Nyiramasuhuko is the ICTR’s only female accused. She is, moreover, the only woman tried and convicted by an international criminal tribunal for genocide, and the only woman tried and convicted by an international criminal tribunal for rape as a crime against humanity.

The only other woman convicted by a post-Cold War international criminal tribunal (the International Criminal Tribunal for the former Yugoslavia) is Biljana Plavšić (right). A leading Bosnian Serb politician with de facto control and authority over members of the Bosnian Serb armed forces, Plavšić pleaded guilty in 2002 to one count of persecution (crimes against humanity). She was sentenced in 2003 to eleven years’ imprisonment.
Each of the Butare Six defendants has appealed the convictions. Appeal proceedings are underway. It is anticipated that the ICTR will complete all its work by December 31, 2014, though no concrete time line has been established in the Butare Six case.
My article explores the intersections between gender and justice in the strategies of participants in the proceedings against Nyiramasuhuko and, more tellingly, in public portrayals thereof.
The judgment itself, 1,500 pages in length and available here, is gender-neutral in terms of its depiction of Nyiramasuhuko. She is presented as a perpetrator indifferently from her male co-perpetrators.
Public portrayals of Nyiramasuhuko, in contrast, exude problematic essentialisms, stereotypes, and imagery of women and mothers. These caricatures emerge at two distinct levels:
► First, they are invoked by the media to sensationalize and spectacularize the trial itself – in short, to titillate.
► Second, they are instrumentally invoked to favor strategic operational outcomes.

For example, those stakeholders who condemn Nyiramasuhuko’s conduct turn to her status as woman and mother to accentuate her personal culpability and individual deviance (i.e. she is a worse perpetrator, a greater disappointment, and a more shocking offender because she is a woman, mother, and grandmother). Those who defend her conduct, including Nyiramasuhuko herself, pretextually invoke tropes rooted in imagery of womanhood and motherhood to emphasize the impossibility of her culpability (i.e. she can’t be a perpetrator, in particular of rape, because she is a woman, mother, and grandmother).
Nyiramasuhuko and her son Ntahobali are not the first parent/child defendants before the ICTR. In 2003, an ICTR Trial Chamber convicted Reverend Elizaphan Ntakirutimana, a Seventh-Day Adventist pastor (now deceased), and his son, Gérard Ntakirutimana, a physician, of genocide. Whereas the Ntahobali and Nyiramasuhuko proceedings tended to become telegraphed to the public as “mother and son,” the proceedings concerning the Ntakirutimanas tended to become telegraphed as “pastor and son.” When it came to the elder parent figure, Ntakirutimana was reduced to his profession, not his fatherhood. Nyiramasuhuko, on the other hand, was reduced to her motherhood, not her profession. Her case is not presented as “Minister and son génocidaires,” nor is Ntakirutimana's case presented as “father and son génocidaires.”
Nyiramasuhuko’s trial and conviction also offer a number of important lessons for the development and effectiveness of international legal interventions in post-conflict spaces.
A need arises to assess the role of femininities and masculinities in the metastasis of atrocity. Recognizing women as agents of violence, as bystanders to violence, as resisters of violence, as well as victims of violence, informs a more nuanced understanding of atrocity and, thereby, solidifies deterrent aspects.
The division between victims and victimizers is not always that clear.
The proceedings against Nyiramasuhuko also reveal the limits to criminalization in the process of transitional justice more generally, and important components thereof, such as emboldening the status of women in post-conflict societies. To be sure; the status of women has been emboldened in contemporary Rwanda. Women sit in the Rwandan Parliament in percentage numbers that well exceed the percentage of women in the U.S. House of Representatives or Senate and that also transcend international averages. Discriminatory land laws have been pared back. Women’s enrolment in education has substantially increased. One way to consolidate these advances for Rwandan women is to demystify those Rwandan women – such as Nyiramasuhuko, and others prosecuted nationally – who perpetrated atrocity.
But women’s advances also need to be demystified, as well.
What women actually do in public roles and as public officials matters greatly. The autocratic nature of Rwanda’s government should not be obscured; neither should the fact that empowered women enthusiastically support this autocracy and thrive within it. Women’s rights can expand in contexts where other human rights may shrink, shrivel, or remain under siege. Gender relations can equalize while other civic rights – freedom of expression and freedom of association, for example – wither.
It is also crucial to hone in on which women have seen their opportunities expand in the post-conflict phase. In contemporary Rwanda, arguably, it is the rights of educated anglophone former émigrées that have become most robustly actualized, whereas the rights of women genocide survivors – largely francophone – remain underachieved.
Just as the role of women during atrocity calls out for more careful and less assumptive or categorical analysis, so, too, does the role of women as change agents after atrocity.
by Unknown at 4:30 AM