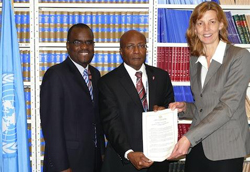 The country that jump-started establishment of the International Criminal Court has become the 3d state to ratify the Kampala crime of aggression amendments.
Yesterday the ICC announced that the Caribbean island state of Trinidad and Tobago had deposited its instrument of ratification at The Hague, where, as Jing Geng just posted, the ICC Assembly of States Parties is meeting for the next several days.
As we've posted, the amendments were adopted by consensus at the close of the 2010 ICC Review Conference in Uganda. They are designed to activate the court's jurisdiction over the crime of aggression; that is, of making war in manifest violation of the use-of-force provisions of the U.N. Charter. Entry into force, which by the terms of the amendments may not take place any earlier than 2017, requires 30 ratifications plus a further vote by states parties.
Back in 1989, an immediate post-World War II proposal for a permanent international criminal court was revived by Trinidad and Tobago, via its Prime Minister, A.N.R. Robinson. (The journey that led Robinson to make the push is detailed in this 2009 paper by Dr. Brinsley Samaroo, of the University of Trinidad and Tobago.) Moreover, this past December a Trinidadian High Court Judge, Anthony Thomas Aquinas Carmona, was elected a Judge of the ICC on the 1st ballot.
Assembly President Tiina Intelmann thus noted on accepting the ratification instrument yesterday:


'It is fitting that Trinidad and Tobago, which has been an active supporter of the Court since before its creation, should be one of the first to ratify these historic amendments.'

(credit for yesterday's photo, courtesy of the ICC, of Intelmann accepting instrument of ratification from Trinidadian officials)
Three states now have completed ratification: not only Trinidad and Tobago, but also Liechtenstein and Samoa.
What's more, the "ICC @ Ten" conference that Leila Nadya Sadat hosted this week at Washington University in St. Louis brought this news:
► In a keynote speech, ICC Judge Hans-Peter Kaul of Germany, who served as the head of the German delegation at the 1998 Rome Conference at which the ICC Statute was adopted, reported:

'In Germany, the ratification law on the crime of aggression amendments has already been approved by the Cabinet of Chancellor Angela Merkel; the draft law is already in the Bundestag.'

► In a panel presentation, Florida International University Law Professor Noah Weisbord listed a slew of states that he said were in the process that numerous other countries are moving toward ratification of the aggression amendments.
Seems time for officials of the United States, who conveyed desire to slow the crime-of-aggression-ratification process at Kampala's end, to begin thinking about the eventuality of entry into force.
by Diane Marie Amann at 5:00 AM