The Coalition for the International Criminal Court: Civil society at the ICC Assembly of States Parties 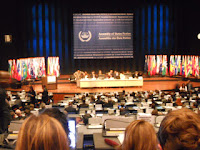 The first half of the 11th Session of the International Criminal Court Assembly of States Parties is behind us. Since Jing Geng posted on the session's opening last week, much has been accomplished:
► A Deputy Prosecutor has been elected,
► A practical discussion was held regarding means for improving state cooperation with the ICC, and
► States parties appear to have reached a consensus on the court’s budget.
A bulk of the action during any Assembly session, however, takes place not during the official proceedings, but in the many activities and side events sponsored by nongovernmental organizations and coordinated through the umbrella group, the Coalition for the International Criminal Court.
The Coalition is an example of networked politics at their best.
Representing 2,500 civil society organizations in 150 countries, the Coalition, which has headquarters in New York and at The Hague, operates on a structure that is flexible, loosely coordinated, inclusive, and empowering. It also provides a lesson in organizational stickiness and adaption.
The Coalition was founded 17 years ago to lobby for a treaty establishing a permanent international criminal court and to persuade reluctant states to sign on to that treaty. Since the establishment of the ICC, the Coalition has transitioned into more of a watchdog role, monitoring the court’s legal work, institutional processes, and relations with states. It also acts as a facilitator between civil society activists and representatives of governments, regional organizations, and the court. (Prior IntLawGrrls posts)
In part because of its relationship with the like-minded states from the outset of the negotiations on the 1998 Rome Statute of the ICC, the Coalition has always played an important role with the court generally, and at the Assembly of States Parties in particular. It is charged with the accreditation of virtually all NGO delegates seeking to attend the Assembly, and coordinates the many civil-society-sponsored side events that fill the agenda. Those functions grant the Coalition substantial agenda-setting power.
The side events bring key actors together to discuss issues of importance to civil society, and are well attended by delegates of both states parties and observer nonparty states.

The Coalition more directly coordinates civil society’s interaction with states, including by organizing regional strategy sessions with the geographically relevant NGO representatives, sessions that are followed by meetings with government representatives.
Given the integral role the Coalition plays and its acceptance by the Court, it is perhaps surprising to see how young most of its Secretariat is.
Perhaps this is a reflection both of the cutting-edge nature of this area of law, and of the importance of these issues to members of the younger generations, who have found through the Coalition a way to be directly involved in structuring relations between states and society.
The Coalition’s key issues at this year’s session of the Assembly of States Parties have included the substantive topics on the formal agenda of state cooperation and complementarity. Also included:
► Discussions regarding the Kampala amendments on the crime of aggression, on which Diane Marie Amann last week posted the latest news,
► Assessment of gender-related issues at the court,
► A focus on the Middle East and North Africa region, and
► Advocacy for adoption of a budget that will ensure that financial constraints do not prevent the prosecutor from investigating situations.
In addition, the Coalition also worked to make the elections of the ICC Deputy Prosecutor more transparent, by asking each candidate to complete a questionnaire relating to his or her background and experiences. The Coalition published the completed questionnaires at its website.
Coalition members also have had the opportunity to meet with ICC President Sang-Hyun Song, with ICC Prosecutor Fatou Bensouda, and Brigid Inder, whom Bensouda last August appointed as the Special Gender Advisor to the Office of the Prosecution. In these meetings, Coalition members discussed issues of importance to them and their concerns known to the court’s principal functionaries.
The side events sponsored by the Coalition not only reflect the important decisions being considered at this session of the Assembly of States Parties, but also shed light on the directions in which civil society is attempting to lead the court.
by Unknown at 2:30 AM