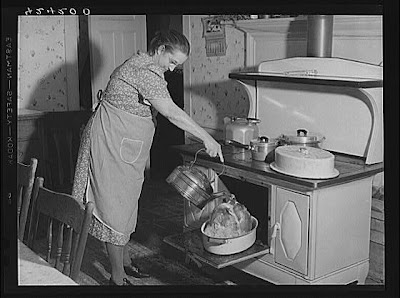 Courtesy of the Library of Congress American Memory project, which has made available a trove of midtwentieth century photos of the FSA/OWI, we remember the mothers, grandmothers, sisters, daughters, and aunts who for more than a century have brought turkey & fixings to Thanksgiving tables across the United States.
Depicted at top is "Mrs. T.M. Crouch" of Ledyard, Connecticut (credit for 1940 photo by Jack Delano); at right, "Mrs. Earle Landis" of Neffsville, Pennsylvania (credit for 1942 photo by Marjory Collins).
Today, honor, and enjoy.
by Diane Marie Amann at 6:00 AM