It's our great pleasure to welcome Irene M. Ten Cate (leftt) as an IntLawGrrls contributor.
Irene is a Visiting Assistant Professor at Marquette University Law School in Milwaukee, Wisconsin, where she teaches in the areas of civil procedure and business associations.
Interested in the interplay between the functions of adjudication and the process of judging, Irene focuses her research on how the presence or absence of adjudicative lawmaking affects adjudication in international commercial and investment arbitration.
Irene earned her J.D. from Columbia Law School in New York and her LL.B. degree from the University of Amsterdam in the Netherlands. She spent two years as an associate-in-law at Columbia and more than six years as a litigation and international dispute resolution associate in the New York office of Skadden, Arps, Slate, Meagher & Flom. She also interned with the Secretariat of the International Court of Arbitration of the International Chamber of Commerce in Paris and worked as a corporate associate in the Brussels office of Cleary Gottlieb Steen & Hamilton.
In her introductory post below, Irene surveys studies demonstrating the paucity of women among arbitrators appointed in arbitrations administered by the International Centre for Settlement of Investment Disputes.
Irene dedicates her post to Aletta Jacobs, portrayed in the sculpture below right, about which Irene writes: 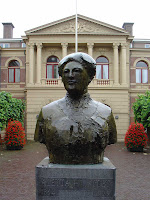 'I frequently passed by this statue during my high school years in the university town of Groningen. Aletta Jacobs (1854-1929) started the world’s first birth control clinic, played a key role in the Dutch and international suffrage movements, and was actively involved in women’s peace organizations. But in the Netherlands, she is best known for being the first woman to graduate from a Dutch university. She needed special permission from Prime Minister Johan Rudolph Thorbecke to enroll in medical school and, a few years later, to sit for exams. This dedication is also an expression of support for all the courageous girls who are fighting the battle for equal access to education today.'