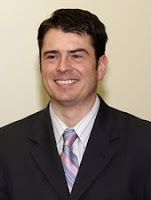 It's IntLawGrrls' pleasure today to welcome a very special guest contributor, Dr. Mark Drumbl (right).
Mark's a longtime member of the law faculty at Washington & Lee University in Lexington, Virginia, where he is the Class of 1975 Alumni Professor and also serves as Director of the Transnational Law Institute. He's also had appointments at a number of law schools in Australia, Britain, Canada, France, and Ireland, as well as the United States.
His teaching and many publications focus on aspects of public international law, including global environmental governance, international criminal law, post-conflict justice, and transnational legal process. He is the author of the just-published Reimagining Child Soldiers in International Law and Policy, as well as the award-winning Atrocity, Punishment, and International Law (2007).
Mark earned a bachelor's degree from McGill University, a master's from McGill and the Institut d'études politiques de Paris, an LL.B. from the University of Toronto, and his LL.M. and J.S.D. degrees from Columbia Law School. He served as a judicial clerk to Justice Frank Iacobucci of the Supreme Court of Canada, and practiced law in both the private and public sectors.
In his guest post below, Mark applies the lens of the 2011 conviction of Pauline Nyiramasuhuko by the International Criminal Tribunal for Rwanda in order to consider the many roles of women in situations of atrocity. His post forms part 2 of IntLawGrrls' 2-part series on women accused of international crimes; here is Part 1, an analysis, by Rosemary Grey and Louise Chappell, of the 2012 International Criminal Court arrest warrant against Simone Gbagbo of Côte d'Ivoire.
Heartfelt welcome!
by Diane Marie Amann at 6:00 AM