Will Obama warm to Doha action?

'At Doha, negotiators will be looking for signs of how Obama plans to put his climate mission in action.'

So writes Suzanne Goldenberg, the D.C.-based U.S. environmental correspondent for Britain's Guardian newspaper, in an article speculating on what the United States might say and do at the 18th session of the Conference of the Parties to the U.N. Framework Convention on Climate Change.
Goldenberg notes that climate change garnered more attention in the weeks before the re-election of President Barack Obama, not in the least because of the damage wreaked by Hurricane Sandy. Obama referred to this renewal of interest in the early-morning victory speech (photo credit & video clip) that he delivered on November 7, when he said: 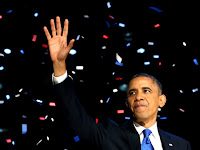 'We want our children to live in an America that isn't burdened by debt, that isn't weakened up by inequality, that isn't threatened by the destructive power of a warming planet.'

Whether and how that aspiration translates into action are the questions of the day for the Doha 2012 Climate Change Conference, which will begin in the Qatari capital just a couple hours from now and continue through December 7.
by Diane Marie Amann at 9:13 PM